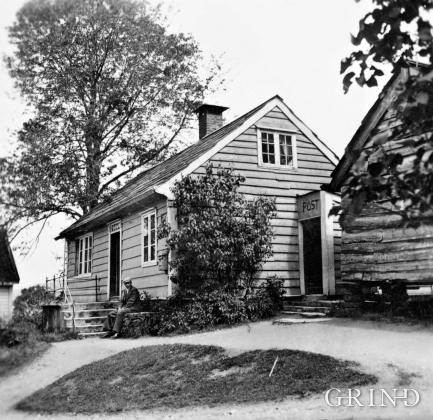 The post house at Øpstad stands out in the landscape. An ochre yellow house with a loft and a white-painted house in Swiss style with ochre edgings, bears witness to a well preserved house from the 1800s, nearest neighbour to the beautiful old vicarage. In the Øpstad hamlet there was a post office for more than a hundred years, until the 1970s. Today it is possible to walk the old post road across the mountain to Strandvik, as part of “Den Stavangerske Postvei” (The post road to Stavanger).

The main postal route between Bergen and Stavanger from 1786 went by Os across Hatvik, with boat across the fjord to Fusa and further across the mountain to Strandvik. The first post office at Fusa was established in 1815, but in 1823 it was moved south to Hammarhaug in Ølve, which at the time housed the bailiff. In 1856 there was again a post office at Fusa. The post transport across the mountain from Øpstad to Vik in Strandvik came to an end in 1861. This is when D/S “Vøringen”(steamer) started its route between Bergen and Hardanger.

Øpstad also served as a transport station: “The Transport Station Øfstestue in Fuuse parish, Strandvig Coastal Administration District”. A transport log from 1838 to 1901, when the transport station was closed down, makes for interesting reading: “The date for arrival and departure, as well as to what place, how many horses, or boats or rowers; notes on whether the travellers had any complaints or not”. The ship log was gone through and signed, normally at the “Vaartinget” (the spring court meeting) or “Høsttinget” (the autumn court meeting). The log also contained the length of the common transport distances. In later years there was only “Tilsigelsesskifte” (transport duty): the travellers sometimes had to wait several hours before the rowers from the farm with the transport duty arrived.

On 24 August 1862 the district agronomist Harald Konow, Fredrik and Carl Konow were transported to Hatvik by two rowers. Konow wrote: “Very good transportation. The station stands out as being very reasonable, thus one can obtain two bowls of sour cream for 12 Skilling”. Capitaine Hagemann is listed as almost an annual certainty around 1870. On 8 October 1869 he is going to “Tøsse in Samnanger” and requisitions “3 men” and “a six-oared boat”. Hagemann was clearly in a position to be entitled to proper transport in accordance with state regulations.

Transport carriage, riding saddle, pistol, post horn and message stick from Øpstad have been taken care of; in Bergen Museum and at the Post Museum in Oslo. A light and speedy transport boat, built around 1850, is in a boathouse in Fusa.