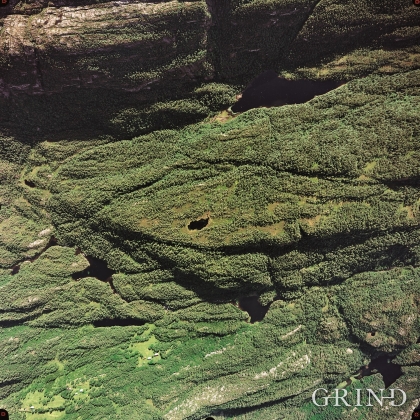 Part of the Yddal nature preserve seen from the air. Lygresåsen in the centre of the picture, Lake Horgavatnet up to the right. (Blom Norkart Mapping)

Yddal is one of the biggest and finest pine forest areas in the county. The rich forest resources provided an important foundation for the settlement of Yddal. Up until about the 1950s, there were three farms here. Where the lumberjacks couldn't get to, the trees grew very big and can be over 300 years old.

But the name “Yddal” is derived from another tree than pine. The name stems from "yr", the old Norwegian word for "Yew tree". There is still Yew to be found in this area. Some of the trees have trunks up to a metre thick, often with rot in the wood, or they may be hollow. Yew such as these must be very old.

It is easy to get lost in these forests, but the rivers and lakes are a good help for navigating. Paths lead into the area from Lygre, but they are of varying quality. The waterways have been used previously for floating timber. Old logs, remains of dams and an old sawmill tell us of earlier times. It was not always easy to get the timber out; the terrain is quite hilly. The old lumber men have left their mark, but in many places the pine forests have grown back.

In rugged, steep terrain and on the crests of hills where logs were not taken out, there are now large and old trees with much dead wood, as one would find in a virgin forest. Lygresåsen is a good place to experience this old type of pine forest. Here, the pine forest lies like a carpet over the whole horizon. The feeling of the wilderness this gives is difficult to find in any other forest area in Hordaland. The area is also protected, as a part of one of the biggest nature reserves in West Norway.

Yddal has a rich plant life, with many species that are rare elsewhere in the district. On the many small, nutrient rich bogs, one sees a good many of these rarer species, among them broad-leaved cottongrass, marsh clubmoss, cotton deergrass, moor rush and dwarf birch. Other rare plants are found higher up on the slope. If you are lucky, you may see the orchids small white orchid and butterfly orchid on the rock ledges.

Even though the black grouse is the most common of the grouses in western Norway, there are also good populations of capercaillie some places. Capercaillie is found at several localities in Fusa. It is very possible that there are most in Yddal.

Capercaille require much of their habitat. In western Norway, they live almost entirely in pine forest with blueberry bushes on the forest floor. The forest must be old and preferably untouched. The place for the mating dance ("lek") must lie in a clearing in the forest, and there can in these parts attract 3-5 capercaillie or thereabouts. This place is central to the capercaillie's life. Its habitat during the rest of the year can stretch over several square kilometres, but lies in general not far from the mating place.

In winter, the capercaillie is a big consumer of pine. One study showed that pine sprigs during winter comprised about 80% and pine shoots 18% of its diet. Pine sprigs are rich in fibre, but nutrient poor. In order to meet its food requirements, therefore, the birds must have a big crop. A full crop for a capercaillie can contain up to a half of a kilo of pine sprigs. In summer time, the grown up birds eat a lot of berries, shoots and herbs, while the babies eat only insects and larvae.

Annually, over 20 000 grouse are hunted in Norway, but one reckons that collisions with power lines take the lives of even more. Such problems are not an issue for the grouse of Yddal.