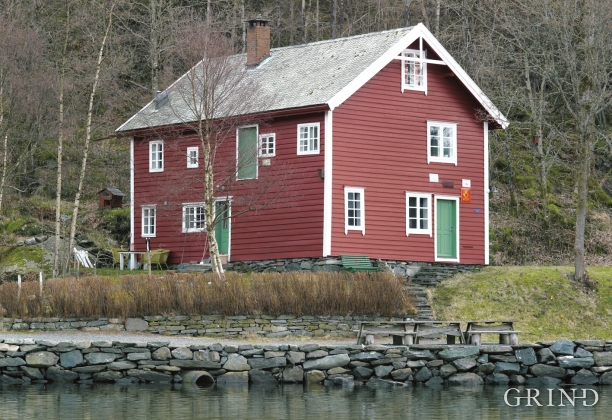 The trading store at Holsund is now in the Horda Museum. (Svein Nord)

Holsund was a nodal point at the time when the fjord was the most important communication route. Here was a lodging place as early as 1820, and trading from 1857, later on also a baker.

The first municipal election for the nearby settlements, in October 1837, took place in Holsund. The municipalities Fusa, Samnanger and Os then became one municipality with the name of Ous.

Holsund was also the venue when Ous executive committee had its first meeting 30 December in the same year, and elected Hans Astrup Krüger from Skjørsand as mayor. During certain periods all meetings of the executive committee of the municipality in Ous were held in Holsund.

The barrel is an ancient container that was specially used for salting of herring. In a statute from 1663 it is stated that herring shall be disposed of “into legal troughs that have the right dimension in accordance with the measures laid down by the Magistrate”. The farmers along the fjord made barrels in their boathouses during the summer, and in the cellars or other work places on the farms during the winter. For the winter production they had to transport the material home from the sea, and then they had to carry the barrels the other way. Men carried three barrels, women two. People on farms far from the sea also carried on this work. The hoops were for a long time made out of hazel. For the farms it was a great benefit to be in possession of a good hazel forest. Later on iron hoops came into use.

By and by machines were taken into use and the production became both easier and faster. Especially on BOGØYA the coopers were fast in mechanising the coopering work. In this part of the municipality the coopering has continued up to recent times, though only as supplementary work. But the production in Fusa has decreased from around 100,000 barrels a year in the first part of the 1980s to around 5,000 a year today. The decline came when plastic barrels took over much of the market. The plastic barrel won the battle for he herring, but not for the fish roe. A whole lot of barrels and tubs are also used for decoration in various connections. From Fusa decorative barrels were thus supplied to most of the country. It therefore seems that the wooden barrel has a life in the future, and that the coopering trade is a trade with a future.

The coopers started the day by preparing staves for one day’s work. This work was carried out in the welding bench. For each barrel 20-22 staves were needed. Without the help of machines a cooper could make between 6-8 barrels a day.In the welding bench the cooper took a few strokes with the righting plane on each edge of the stave, and then the hollowing in the middle of the stave was made with the hollowing knife. This made it easier to bend the stave.

When the welding was finished, the stave had to be smoothed. The staves were planed at the edges and received an even curve from one end to the other. The angle had to be such as to make the staves fit very tight together when they were put into a ring. Experienced  coopers did this by eye. The barrel was now erected. The staves were gathered and the raising   hoop was threaded down the staves. The raising of the barrel required precision and long experience to prevent the barrel from collapsing and fall apart. An experienced cooper would use less than a minute to “raise” a barrel. When the last stave was in place the hoops were put on and fastened with a couple of raps by the mallet. The staves were then knocked even.

The barrel was turned around and the spread staves were pressed together with a “barrel tightener” (tønnerinne). A large iron hoop was placed over the end staves and the tightener was removed. Now the barrel was moved to the fireplace and heated. The fire iron was filled with wood shavings and lit. The barrel was placed over, and it thus became warm and soft. After the heating the stave ends were forced tightly together with the tightener. Corresponding chime hoop and bulge hoop were put on. Now the barrel was to be driven. The hoops were knocked down on the barrel with mallet and driver. The double conic form of the barrel forced the staves closer and closer together during the driving. The cooper had to drive the barrel until it was tight.

Before the heads could be inserted the barrel had to have grooves made at either ends, be crozed. Before crozing, the barrel had to be smoothed on the inside with adze. The croze is a right-angled groove that the heads fit into. It was made with a croze plane. The head was put in place and carefully knocked in with the mallet. Then the chime hoop was put on. The assembly hoops were now loose and were removed. Finally the barrel was planed on the outside with a finishing plane, and the stave joints were planed smooth. The cooper finally tested whether the barrel was tight, by drilling a hole in one of the ends and “blowing” the barrel until he felt the overpressure. The barrel was then marked and stored.

Holmefjord and Bogøya are the core centres for the coopering trade in Fusa. Both at Sannøysjøen, in Holsund and at Boga there has been large-scale barrel production; at Boga and in Holmefjord there are still businesses that keep people employed.