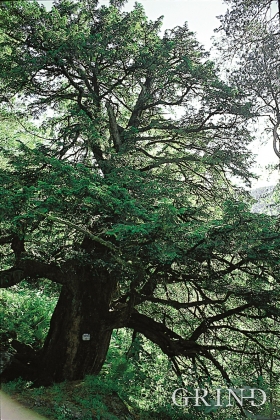 How old the giant in Møkjedalen on Varaldsøy Island is, nobody knows, but with its 11 metre height and 5.4 metre trunk diameter (measured in 1998), this is Norway's biggest Yew tree.

The English Yew grows slowly and can take many shapes. Normally, it has one or few trunks, with a wide crown and long, sprawling branches. In Norway it seldom grows taller than 10–12 metres, but at its highest it can reach a height of about 15 metres. Hordaland is especially rich in Yew trees and has several giants. Such "originals" are reputed to be very old, but this can be difficult to prove. Several Norwegian Yew trees are believed to be 400--600 years old. From the British Isles one finds information about Yew trees that are supposed to be 2000 years old.

Since the 1930s, 20 Yew trees have been protected as historical monuments. Three of these grow in Møkjedalen. The one tree is nearly dead, but the other two are gigantic and vibrant. The biggest yews are - like the other protected giants - *[male] trees. The tree has a mighty crown of powerful, over seven metre-long branches that stretch outwards. It would have been several metres higher if the tops had not been broken (probably by snow) several times during the years. The trunk is hollow, with big cracks. One can crawl into the tree in a hole down near the ground and see the light streaming in through the branch-holes.

Noble liverwort - not only in Eastern Norway

Noble liverwort (Hepatica nobilis) is also found in western Norway, even if in a somewhat limited area. It grows at Kvinnherad and Kvam in Mid-Hardanger, but not in Voss and Ulvik, which have a climate more like that we find in eastern Norway. Many plants that are typical for eastern Norway are only found in the inner parts of the county. Why this is so, no one really understands. One possible explanation why Noble liverwort does so well only in this small part of Hardanger could be that there is a lot of calcium in the bedrock just there.

In the area between the town of Torvik and Gjermundshamn, and not least on the island of Varaldsøy, there is a lot of noble liverwort. It often grows on loose soil in protected lees and on ledges, especially on mica schists that weather easily, and where there is little competition from other vegetation. Noble liverwort often grows by stream gorges and can be quite abundant there. It is an early spring flower, which is at its finest in the middle of April.