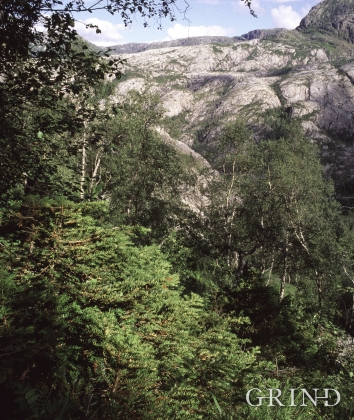 Three kilometres below Vintertun the narrow and steep Langebudalen flows out into Sørdalen. In the valley of Langebudalen is one of the highest lying occurrences of English Yew in Northern Europe. The valley has a favourable local climate, with a good temperature and protection from the cool winds from the north and east. In addition, the big masses of granite function as heat source, helping to protect against night frost.

The English Yew Tree i Langebudalen is found at about 550 to 600 metres above sea level. This is unusually high for this type of tree, which normally requires relatively warm summers and mild winters. In the vegetation otherwise, there are no warm-loving deciduous tree types. Instead, we find a row of coastal plants that are common in nutrient-depleted forests and moors, for example, deer fern, heath rush, heath bedstraw, heath fern bod asphodel and cross-leaved heath.

The English Yew tree can grow more than ten metres upwards along the mountainside, its branches seldom reaching over two metres long. It is multi-stemmed and grows up from offshoots that creep along the ground - an adaptation to the deep and stable snow cover.