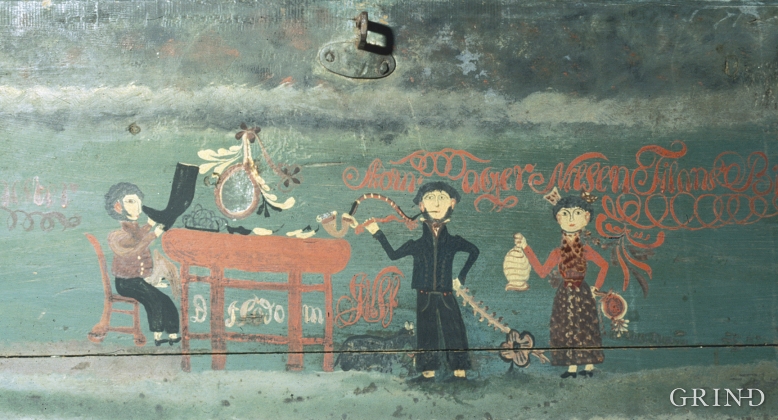 The charming rendition in folk art painting of the shoemaker at his last. (Nils Georg Brekke).

In 1827 Aslak Torgeirsson and his wife Åsne, came from Levadd in Vinje in Telemark County. They came the long road across the mountain from Røldal to Stordalen, each carrying a small girl on the back, it was said, and they wanted to greet Åsmund Vinje, the Haugian . Aslak was also a Haugian, and he became one of the local leaders of this lay movement.

Aslak and Åsne built the smallholding “Firamål” belonging to the farm Frette and lived there for many years. Aslak Frette was a talented decorative painter, from an old craftsman’s family in Telemark. His style is reminiscent of that of Bjørn Bjaalid and Hans Glittenberg, but it is simpler and not so rhythmical. Aslak painted a lot in Etne and in the northern part of Ryfylke County, and he was one of the numerous east Norwegians who found themselves a living in the fjord settlements. He was a respected man in Etne, and many remembered that wise man of few words.

On a bed in Stordalen he painted the following words of wisdom: “I at my bedpost have more than joys enough to make me think of my last straw.”  In 1870 he joined some of his children to America. For many years before this he had cooperated well with his neighbour and blacksmith, Haldor Haldorsson Mæland on the smallholding “Vadlabrotet”. Haldor fashioned fittings and locks for the chests that Aslak painted. Aslak’s son, Tor, probably born around 1840, continued with the decorative painting after his father left for America. He was known by the name Tor Firamål. As he follows the changes of fashion at the end of the 1800s: simpler roses and sparing décor on an imitation background, oak or mahogany, so-called grain-painting. As a writer, he was a master. Many of his chests are pearls of decorative writing. In the Sæbø Steading there is a chest with the following inscription: “The Servant’s Clothes Chest from Etne Painted 1872 by T. Frette”.