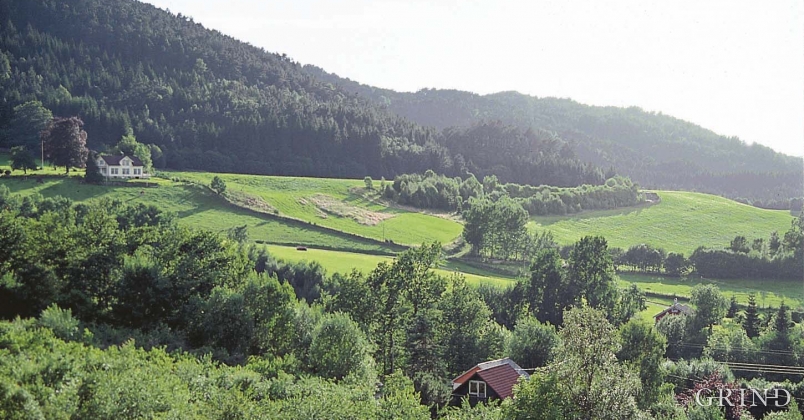 The flat terrace on the moraine ridge at the farm at Tjedla shows how high the sea level reached at the end of the last Ice Age. (Inge Aarseth)

In Skånevik there are marks left from the ice edge that advanced during the thousand-year cold spell (Younger Dryas) that marked the end of the Ice Age roughly 11 500 years ago. The glacier first proceeded out into Åkra Fjordand and around Vannes and thereafter sent an arm in toward Skånevik. Here, the glacier lay down an end moraine up against the mountainside.

About 13 000 years ago, the climate changed from conditions nearly like today's, to 4 -5 degrees colder some hundred years later. The glaciers grew bigger, especially in the mountains in Mid- Hordaland, where most of the snow was deposited. The arms of the glaciers reached out of the valleys and fjords. In Etne there are terraces and moraine ridges at Austreim and Grindheim that clearly reflect the conditions at the end of the Ice Age. When the glacier reached the neighbour town Skånevik, Prestafjellet mountain stuck up over it. It would had been an impressive sight if we could have seen the edge of the glacier come around the mountain. From the steep north slope between Prestafjellet and Håfjellet further east, there are frequent rock falls from frost-shattered bedrock. The glacier transported these gfragments along, in addition to the stone it had plucked loose itself, around the mountain and into the moraine ridge in Skånevik. The whole area that is now Skånevik centre was either hidden under the glacier or lay under sea level, which then was 83 metres higher than today.

The moraine ridge at Skånevik is finest between Miljaelva and Valdraelva, where a roughly hundred year old planted forest of beech also grows. The streams have carved their way through the ridge, which is up to 10 metres high and 35 metres wide at its maximum. West of Tjedla one can follow the ridge roughly one kilometre, almost all the way to Leiknesvika. Here, it is naturally enough destroyed because the ridge is partly levelled off for agriculture. But, some of the levelling was done by nature herself when the sea encroached after the ice melted away. Just west of Tjedla, at 83 metres elevation, we find a surface that the waves had levelled out on the beach about 11 500 years ago.

On the other side of Skånevikfjord the glacier edge reached Ølfernes. Right across the fjord from Skånevik to Olfernes, the glacier pushed up a 50 metre high moraine ridge. On the bottom in front of the ridge, the glacier deposited a 150 metre-thick layer of clay that the glacial outwash river had carried along.

Bøkeskogen (beech forest) on the moraine ridge in Skånevik is one of the most northerly in the country - a beautiful nature area with an accessible nature trail. (Svein Nord)