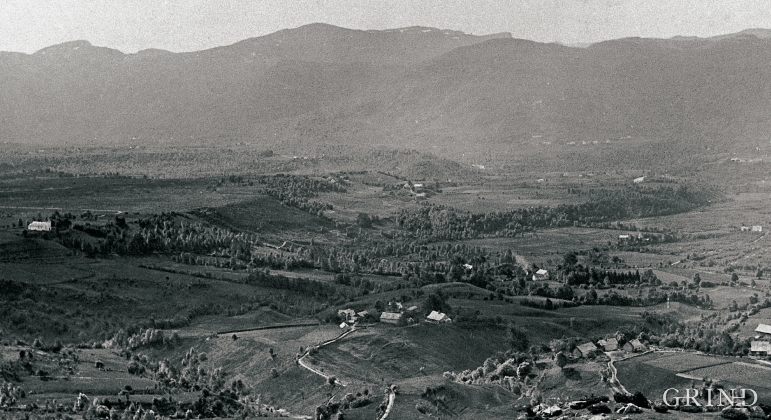 Toward Støle and Sørheim, 1920. The front of the terrace to the left of the photo was removed by sand quarrying in the 1970s. The Kambe Farm in the foreground with its distinctive ridges and side-valleys. (Etne Municipality)

Much of the sand and gravel that the town of Etne is built on was laid down at the end of the Ice Age and is evidence of melting glaciers and roaring meltwater rivers. The uncompacted material in the big terraces leave their unmistakeable mark on the wide elongated valleys.

When the Etne area became ice-free toward the end of the last Ice Age, the sea level rose to about 70 metres higher than today, since the ice had been pressing down the land. Just below Håfoss, in the blue clay on what earlier had been seafloor, shells have been discovered that lived about 14 000 years ago.

Stordalen was probably ice-free for a while before the glacier arrived at Håfoss. As it proceeded, the meltwater rivers carried large quantities of sand and gravel out into the fjord. The sloping layers (known as forset beds) and top layers (topset beds) that were laid down then, about 13 5000 years ago, and which we can see today in the gravel quarry by Nord River, filled the fjord all the way up to sea level in a big delta in front of the glacier. By this time the sea level had risen several more metres and it stood ca. 80 metres higher than today.

About 1000 years later, during the cold period known as the Younger Dryas, the glacier advanced again both in Stordalen and Litledalen, and spread out over parts of the delta, without the delta sediment being shoved away. The tongues of the glaciers from Stordalen and Litledalen just about reached each other about 12 3000 years ago, and they deposited end moraines in two arcs from Austreim to Steine.

Toward the end of the Younger Dryas the valley glaciers had one final spurt. The side moraines from this last ice advance come into view especially well in the landscape to the north of the agricultural college in Etne.

The climate grew milder about 11 500 years ago, and the glaciers began to melt. During a short period small lakes were formed between the glaciers and the delta flats. Fine-grained sediments were deposited, layered glacial sea sediments, that we now find in Londsalen, between Håfoss and Austreim, as thin layers of alternating silt and sand.

The glaciers then disappeared, and when the weight of the ice was gone, the land rose. The rivers carved down through the large terraces and transported sediments to ever lower delta flats out in the fjord.

Eventually, large river plains were formed by the meandering rivers that continually carved new channels as they simultaneously deposited sand and gravel on their journey to the sea.

Place names often reflect the natural conditions. Kambe, 500 metres northwest of Støle Church, tells of a landscape with sharp ridges between deep V-shaped narrow valleys, or ravines (“kambe” is a word of old Norwegian origin, meaning “comb”). This distinctive landscape is formed in clay and silt that was deposited on the sea floor in front of the delta at Austreim-Støle at the end of the Ice Age, about 13 000 years ago.

When the land rose, the delta plain became a large terrace of sand and silt. Clay and silt that had been deposited in deeper water also rose and eventually became exposed on land. Most of the land uplift occurred during the first 2000 years; in the beginning, the land rose by about 5-10 centimetres each year. It took some time before soil was formed in the clayey earth. Silt- and clay areas below Støle were therefore lying without protective vegetation for a time. On the terrace the groundwater seeped down under the ground, while the water collected in streams on the clayey earth and carved out ravines with ridges between them. 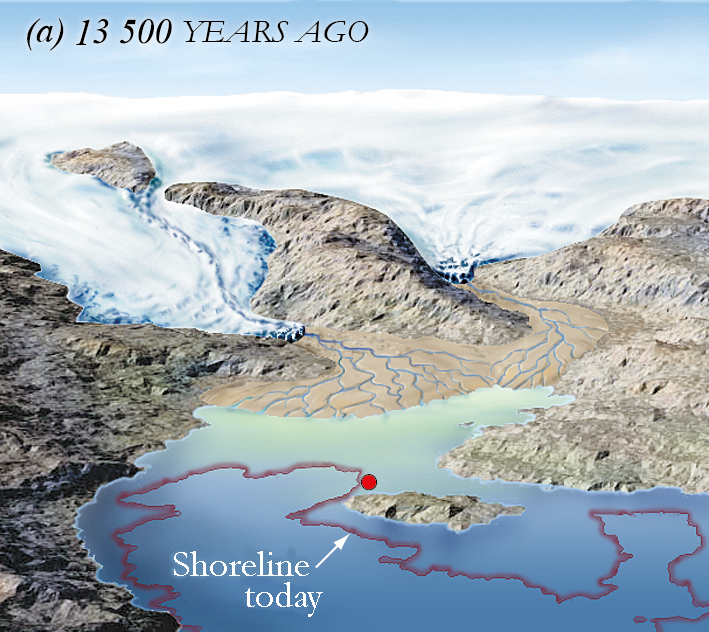 The town of Etne during the ice melt and today. (a)13 500 years ago. Inge Aarseth/Kjell Helge Sjøstrøm/Masaoki Adachi 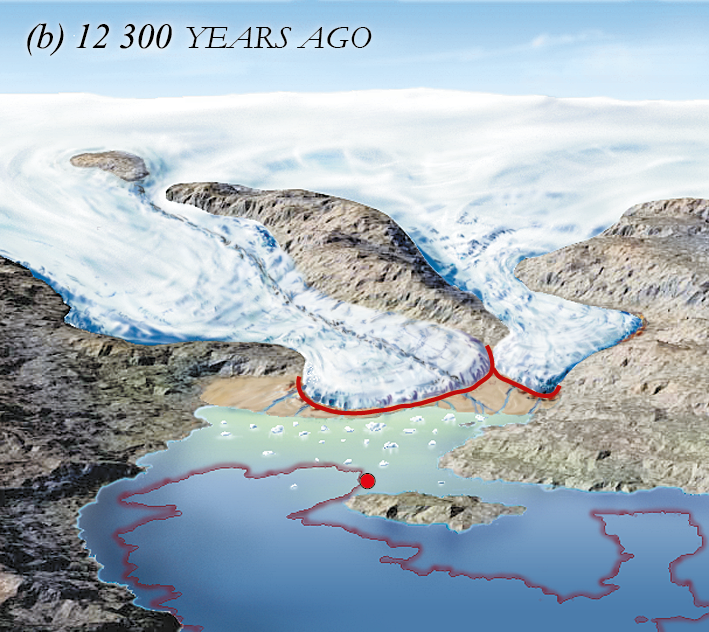 The town of Etne during the ice melt and today. (b) 12 300 years ago. Inge Aarseth/Kjell Helge Sjøstrøm/Masaoki Adachi 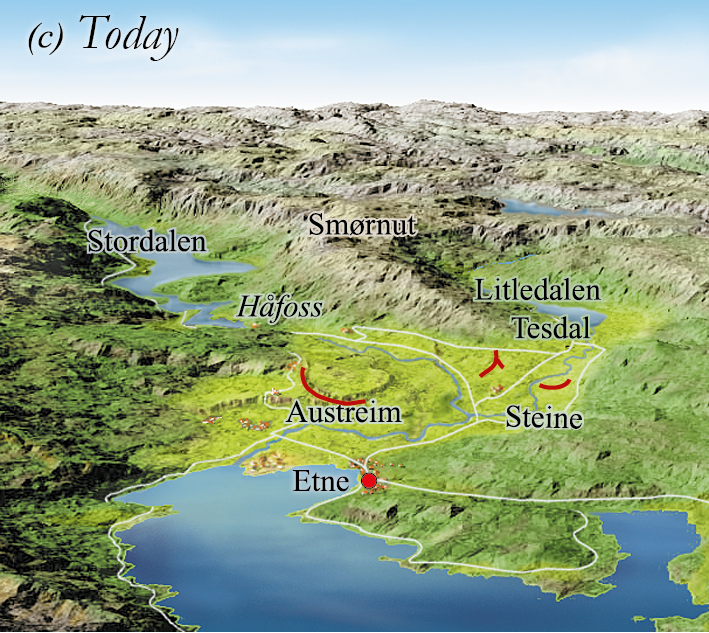