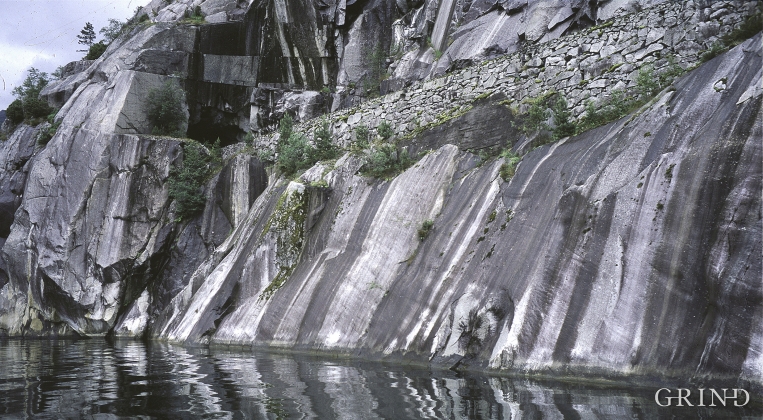 From the old road along the Åkrafjord (Svein Nord).

One of the most fascinating roads in the county is the E-11 along the Åkra fjord; a masterpiece of engineering art. There are many examples of good old craftsmanship along the road, evident in stone bridges and road buttresses. The road was built in 1940-42 and was the largest road project in the State Roads Authority’s history. More than 1,000 men were at work here in 1940 and the road was fashioned by hand; there were road insertions 40 metres high, walls 30 metres high, 13 tunnels and 40 bridges in all. The German authorities pressed on to have the road finished, both from an employment aspect and for military reasons. The road building was therefore speeded up and did not in the end attain the standard originally planned. Later, the road was improved and reopened in 2000, including the 7 km-long Åkrafjord tunnel.

The cattle road through Stordalen through Øyno and further over the mountain to Røldal is one of the old communication routes between east and west. Right back to the Middle Ages this has been a key connecting route. Røldal Church was one of the most important places for pilgrimage and the annual Røldal Market attracted many people right into the 19th century.

The post route from Skånevik to Etne is part of this connection north – south; the Stavanger Post Route. The post roads were developed with ever higher standards as the postal services were better organised in the middle of the 1600s. Only in the 1800s did these roads become drivable. The post road between Skånevik and Etne has been well restored as a recreational route.