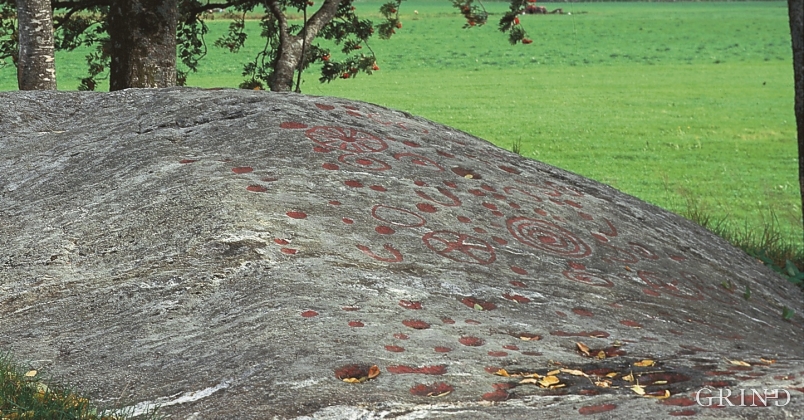 Helgaberget – the holy hill – is a little rocky crag which thrusts itself a few metres above the terraced surface of Støle. The surface of the rock is strewn with figures inscribed in the rock and it was, as far as one can judge, a cult centre in the Bronze Ages. The name could indicate that the tradition of holiness can have lasted for almost 3,000 years.

The rock inscriptions at Helgaberget belong to the farmers’ culture and are of the type that we call agricultural inscriptions. It is ring figures and rock depressions which dominate on the rock surfaces at Helgaberget. There are no figures of ships here, which are otherwise so common amongst agricultural inscriptions in Hordaland, and in Etne. Nor do we find drawings of footprints, human beings or animals. We have no clear knowledge of what the reason is for these differences in the choice of subjects.

At Helgaberget it is the rock depressions which dominate: round, small saucer or cauldron shaped hollows, from 3-4 to 10 centimetres in diameter. At least 270 have been identified to date. In addition there are some which are thought to belong to the ring figure symbols.

Here there are 23 ring figures of different types. Some of them have spokes as in a wheel, others are carved out as several concentric circles within each other, with a rock depression in the middle. Here there are also about 20 oval or U-shaped figures.

Helgaberget is situated in the middle of an unusually rich - in terms of western Norway - area of finds from the Bronze Age. Here there have been several burial mounds, and some few hundred metres north east of the inscriptions, a costly bronze necklace was found.

The Etne rural district is rich in historical monuments. There are grave mounds, fortified refuges from the Dark Ages and rock inscriptions. The tree is an unusual subject for a rock inscription, but we can find it on the Bruteig Stone - a particularly rich and varied area of inscriptions. The rock carvings have been dated back to the Bronze Age. (Egil Korsnes)

No district in Hordaland has as many rock inscription sites as Etne.

Some of the sites have only rock depressions, whilst others have subjects of different types. Ships, ring figures and figures resembling footprints are the most usual. Otherwise on the inscription site at Etne human figures, animals, trees, bulls and various other subjects are represented.

We call these agricultural inscriptions because the conditions surrounding the finds indicate that such groups of subjects belonged within a culture influenced by agricultural activity. It is thought that these inscriptions are a visible reminder of religious and ritual actions which have largely had to do with fertility and life. They can be dated to the Bronze Age (1800 to 500 BC).
The rock depressions are the most common subject: round, small saucer or cauldron shaped hollows, from 3-4 to 10 centimetres in diameter.

The ships´ figures are most commonly highly stylised, but even so it could be that they do give a certain impression of what a Bronze Age ship looked like.

The ring figures can have different designs, from a simple circle to several circles within each other. Some have “spokes”, as within a wheel, or as a cross and these have been called “wheel cross” or “sun cross”. The “footprints” are often carved as a pair, and are drawn as a simple contour line.

On the smooth rock surfaces above the road at Fjøsnaneset there are several inscription sites. Here we find boats, ring figures and footprints, but few rock depressions.