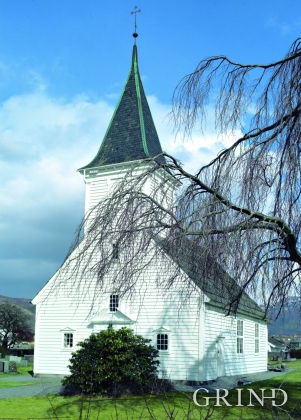 Gjerde Church is first mentioned in 1288. In the accounts we can see that it was a stave church with galleries around and a tower towards the west. This stave church was destroyed in a great storm in 1673. Then a wooden church was erected, and it had been moved from “Little Sandvigen” (in Bergen?). The church was constructed by the Builders Ole Bysheim and Ole Nedre Eikanger from Osterøy, “on the same spot as the blown down Gjerde Church had once stood”.

A new tower was built in 1930 with a priest’s vestry and a baptismal vestry. It was also then that the beautiful wall paintings in the chancel and the nave were uncovered, and the altar piece and the pulpit were restored. The altar piece is a Catechism  piece from the 16th century, painted by Johan Wingaard in 1738. The pulpit is from the 17th century, with images of the four Evangelists. The walls of the choir are decorated with Moses and Aron and other Biblical personages set in arches whilst the arcades in the nave are covered with vine and floral motifs.

Two medieval bells hang in the tower. One of the bells has a lengthy inscription, partly in Latin and partly in Old Norse. In the translation by B.E.Bendixen the inscription says: “In my metallic way as I praise the Lord (the heavenly powers) God, I raise my voice so that the common folk shall go to choir (mass) and everything good. Jacob made me in the year 1315. Erling the priest had me made.” The other bell has a series of pilgrim signs cast into it, a Birgitta symbol from Vadstena cloister, four Olav signs from Trondheim and a sign which portrays the holy bishop Servatius of Maastricht in Holland.

In the Historical Museum in Bergen are to be found two rune stones which, until the 1820s – 1830s lay in the churchyard wall at Gjerde Church.

On one of them is written (in translation): “Ketil laid this stone for Finn his son-in-law”. The inscription has been dated back to the time around the year 1100. On the other stone it says: “Erlend wrote down these runes from his father, Olve”.

There is much to suggest that this can be the Erlend from Gjerde, who together with Aslak from Finnøy were the leaders of the farmers from the western counties in their struggle with Olav Haraldsson.

Erlend was probably one of those men whom the king brought together in the first year of his rule and gave power, but who subsequently turned against the king. It was surely this failure that the king referred to when he, as the legendary Saga of Olav tells us, spoke in anger and disappointment to his opponents before the battle, and expressed himself thus to Erlend: “I made you, small as you were, into a great man”. Erlend from Gjerde and Aslak from Finnøy fell at the Battle of Stiklestad.

In the churchyard at Gjerde a tall stone monument still stands with a cross inscribed at the very top. Several researchers have been of the opinion that the monument can have been put up in memory of Erlend from Gjerde.