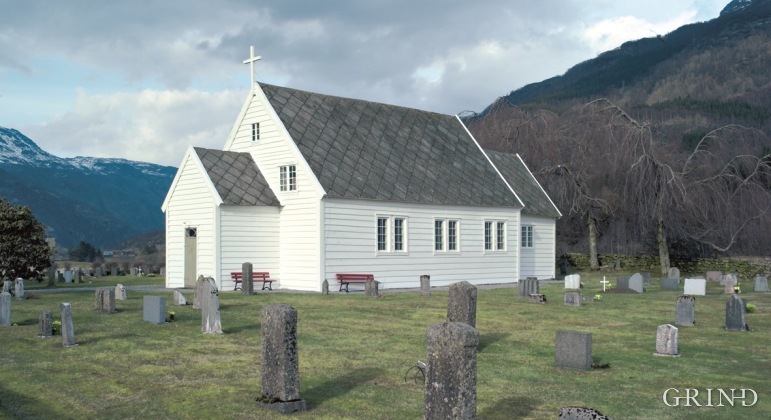 Grindheim church. (Svein Nord)
The first church at Grindheim was a stave church with a free-standing steeple. The church was first mentioned in 1326, but was probably built long before this time.

Grindheim is one of the old major farms in the Etne community. The large terraces at Grindheim and Støle provided good conditions for corn cultivation. West of the church is a large collection of graves, probably from the first centuries of our calendar. Following the great storm in 1673 the stave church was rebuilt. At one time it had a nave of logs with cogged joints and a chancel of staves. In 1728 a new timber church was built. This building was expanded in 1853. The nave was then sawn over, the western part was moved to the west, and new timber logs were jointed into the longitudinal walls. As the church stands today, it was restored in 1954. When new church benches were put in, the interior was also painted. A beautiful medieval door fitting is now mounted on the western door. Within the interior there are also decorated planks from the stave church. In a display case on the north wall of the nave there is a rare property of the church, a decorated wax candle, Easter candle or a christening candle.

These candles were used at special services. This candle is probably originally from late medieval times or the time around 1600.

The stone cross standing just inside the church wall was previously inside the wall itself. Originally it probably stood on the “Cross Hill”. In many places stone crosses were gathering places before churches were built, perhaps also later on. The proverb: “He goes neither to cross nor church” may be a reference to this. The top part has been knocked off to render the cross its T-shape.

For many hundred years there was a runic stone in the church wall at Grindheim church. It is now erected at the north wall of the church, where it is bolted in. On one of the broad sides a cross has been hewn. The runic inscription is on one of the sides, and reads from the bottom up (in translation): “Tormod erected this stone after Tormod Svidande, his father”.

The nickname of the older Tormod, which is derived from the verb to singe, or burn, may have stuck with him from several reasons. Some think it may be connected with burning for clearing land, but this is far from certain. The inscription can probably be dated to the middle of the year 1000.