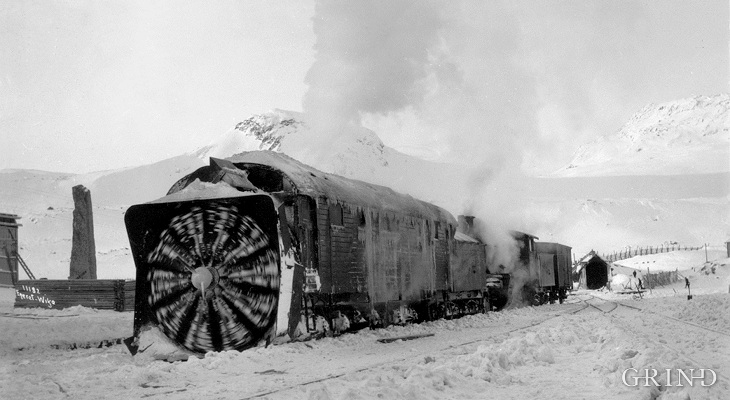 Before the railway construction could start, supply roads had to be built from Voss. Flåm and Geilo into all sections of the route. This constituted in reality a new drivable road from Palmafossen to Uppsete and from Flåm to the high mountain, in all 122 km. During the construction time from April/May to October around 70-100 horse loads were transported to the mountains.

The greatest work was the Gravhals tunnel, which was more difficult than had been expected because the mountain was so hard (gneiss). They worked here for three work shifts week after week for six years. There had been plans to hand drill the east side 1.6 km, but as progress was so slow, they put in air-pressure drills powered by electricity from Kjosafossen.

The section Voss-Myrdal was opened to traffic in the summer of 1906. From June 1908 the section Voss-Gulsvik was put into operation. Wednesday 24 November 1909 the first passenger train went from Bergen all the way to Oslo. The continuous railway Bergen-Oslo was formally opened by King Haakon on 27 November 1909. The “rallars” (workers) came from all over the country, also from Sweden and Finland. The first trades union in Voss was “Fram” the association for the railway workers.

Crossings, fills and tunnels should make us stop and think about the effort that was put into the work. Air pressure drilling was only used in the Gravhalsen tunnel. For the rest every single borehole has been drilled by hand.

Steam locomotive pulled almost all trains across the mountain until 1957. The change to diesel took place over the next two-three years. From 1964 the entire Bergen railway was electrified. When the Bergen railway was new, it was considered a masterpiece in engineering skill and a national accomplishment.

In the mountain it is possible to see the impressive work that was done on the road with walls and bridges. Today the Rallar road is used mainly for cycle touring.

The railway workers remain one of the most distinctive vocational groups from industrialism's entrepreneurial era, with their own culture. From Tunnel 38 at Hallingskeid (photo: unknown; owner: The Norwegian Railway Museum).

"Among the wildest mountains in the deserted outback, we finished laying the railway track. Fully loaded trains now roll, where wolves wandered a year ago. East and west were bound together, by the railway workers' skilled endeavour; but the salary was small that the State gave, most often just a wreathless grave!"

The old construction road from Finse to Myrdal is popular as a cycle route. (Helge Sunde).