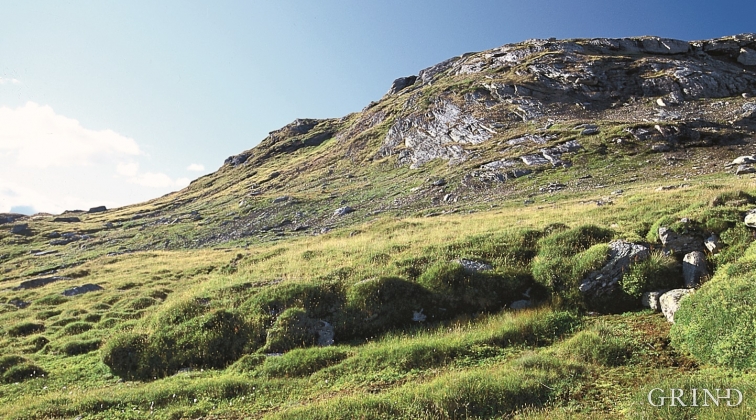 The soil in the slope north of Finse Station is fine-grained, even though the bedrock consists of large-grained granite. The is partly due to the fact that glaciers transported moraine soil down from the fine-grained phyllite higher up. Fine-grained soil holds water well, and there is a lot of access to water here during the snow melt. Solar heating on the south side means moreover that the temperature difference between day and night can be a lot in periods. In addition, the snow stays so long in the area above Jomfrunuten that it reduces the growing season for the plant cover. All of these factors together make the geological processes occur faster and clearer here than other places outside of the glaciers.

Some hundreds of metres up on the slope toward Jomfrunuten there is a gigantic stone block. The block is five metres high and five metres wide, and weighs roughly 350 tonnes. It is clearly marked, with a fissure on the back and a tongue-shaped mound on the front of the block, showing that it was a plough block, the largest of its kind that is documented in the whole world. It sinks into the slope by its own weight, ca. 1 centimetre each year. The water saturated earth that freezes under the block causes the frost to move the block out from the slope. When the ice thaws, the block falls back into its horizontal position again. The collective effect of these to and fro movements are a sinking back into the ground. Smaller blocks along the whole slope are exposed to the same process.

Roughly a kilometre further east there are some distinctive large, turf covered tongue forms, without stone blocks. They are nearly 40 metres long and 1 metre high in front. At the front the vegetation seems to disappear in under the tongue, as it seems to roll forward. These are examples of "soil creep", which creates mounds covered by peat that creep and slide slowly down slopes, as soil tongues. Soil creep comes from the frost action under the earthen mound, with ice that hinders the meltwater from seeping down into the soil: The lowermost layer of earth cannot thaw at the same time as the uppermost layer thaws in the summer. The thawed and water saturated earth therefore begins to creep slowly down over the frozen under-layer. Vegetation at the top of the earthen mound makes it seem like the seepage occurs in the form of a rolling motion.

Frost shattering occurs when the water inside of the cracks cools. Since water is heaviest at +4 °C, it is possible to freeze at the top of the crack and form a kind of ice plug. With further freezing the pressure increases more than the block is able to withstand. An increase in volume of 10 % is enough for the bedrock, after repeated episodes of freezing and thawing, to be weakened and break up into smaller blocks. On Finsenuten there are many frost-shattered blocks.

On the back side of Jomfrunuten there is a larger area with stones and blocks in a pattern around pockets of finer material. This phenomenon is called patterned ground, or polygon marks. How can nature create such patterns? It starts when fine-grained water-saturated earth containing stones and blocks freezes and expands such that the surface rises. When the whole mass melts in spring, some of the fine-grained material sinks under the stones and blocks, before everything falls back into place. During this process the stones and blocks get moved toward the surface and thereafter out toward the sides. In the end, they meet other stones undergoing opposite movements, and a polygon pattern is formed. On sloping terrain this pattern is oblong before it then becomes "stone stripes" down the slope.

Map of the frost phenomenon (and fossil ripple marks) in the Finse area. (Atle Nesje/Eva Bjørseth)