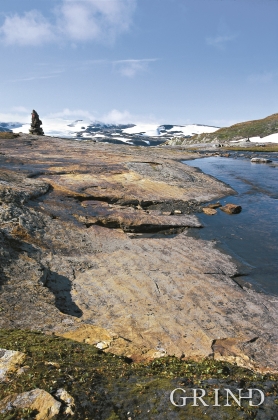 On the trail toward Kyrkjedøri, a half hour walk from Finse station, we find these small ridges -ripple marks that tell of beating waves in an ancient sea. (Haakon Fossen)

FROM THE SEAFLOOR TO THE ROOF OF NORWAY

Roughly 550 million years ago, what is now Finse lay at the bottom of the sea - the remains of mud and clay that were deposited in this sea have ended up on the roofs of Norway. Also the thrust sheet from the continental collision has found its way to Finse, after a several hundred kilometre-long, trek through the mountains, that took several tens of millions of years to complete.

At the bottom of the geological sequence of strata, under the remains of mud and thrust sheet, lies the ancient basement of granite. The open valley at Finsevatnet is carved from this granite. The beautiful Finse granite is easy to recognize by its large, red, rectangular feldspath crystals. It is also the first thing travellers on the Bergen Railway see when they climb off the train. The station is namely built of this stone type. The Finse granite ends a bit east of Finse, but it stretches far to the west - nearly to Hallingskeid.

At the end of the Precambrian Era, Finse was located farther to the south, perhaps south of the equator. Wind and weather had eroded away the old basement to one layer, nearly evenly flat. Today's wavy landscape on Hargangervidda is for the most part this same surface. When the sea level rose in over the basement surface at the beginning of the Cambro-Silurian time nearly 550 million years ago, clay and mud was deposited on the bottom, and later got altered to become phyllite. Some places sand was also deposited under the clay, right onto the Precambrian basement rock. If we walk the path from Finse station toward Kyrkedøri, we wander along the Finse granite until we reach the basement surface at around 1360 metres elevation, between Jomfruknuten and Kvannjolnuten. Right where the path crosses a stream we see a sand and gravel layer that has turned to stone. The sand grains are weathered from the Finse Granite, and contain structures that tell of waves beating on the shores of a southerly sea (picture). If we put our finger right on the boundary between the Finse granite and the sandstone, we point to a spot where around 400 million years are missing from the geological history book.

A trained eye can easily follow the top of the Precambrian basement surface both on the north- and south sides of Finse valley. The phyllite lies over this, and there has also been room for a few limestone layers, layers that were laid down by calcareous-rich organisms in a shallow sea. Finsesnuten is the nearest we come to a phyllite mountain in these parts. Phyllite and mica schist weather namely very quickly. Therefore the landscape tends to be both greener and a bit flatter in the phyllite zone. The phyllite varies in thickness, but is typically about 300 metres thick.

Hallingskarvet and Hardangerjøkulen, and Hårteigen farther south, rise up over the flat phyllite landscape. These massifs are built of a hard slab of basement rock, or a thrust sheet, that was torn loose from the basement, far to the northwest. This several kilometre thick complex, the so-called Jotund Complex, once lay over the whole area from Ulvik to Valdres. During the Caledonian mountain-building event a sheet of rock was thrust over the phyllite, which at that time covered the whole area. Only remnants of the bottom of the Jotun complex are left. These remnants tolerate the erosive powers better than the phyllite. Therefore it is they that form the high, flat and naked mountain tops, as a protective cap over the less resistant phyllite.

Terrain model of the geology of the Finse area.
1. Precambrian scree
2. Ripple marks from waves
3. Bedrock crushed by meteorites

Far back in time a meteorite swarm may have bombarded the Finse area. Along the path toward Krækkja at least one place with crushed stone is visible. The bedrock itself looks like it has been totally smattered, with traces of graphite - a mineral that needs very high temperatures to be formed at the earth's surface. It is not unthinkable that these distinctive rock types were formed at the same time as a bigger and better documented meteorite impact close to Garno at Nesbyen in Hallingdalen. If so, the impact occurred late in the earth's Precambrian Era, probably about 650 million years ago.