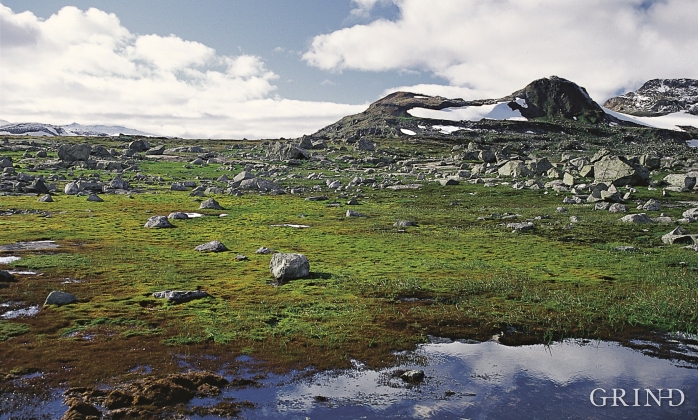 Large mats of mosses in moist places in the high mountains are a sign that the snow has not melted until long into the summer. White cottongrass is one of few vascular plants that tolerate the extreme conditions. In the background Nordrenut and Vesle Finsenuten, from the south-east. (Wenche Eide)

HOW TO SURVIVE IN THE HIGH MOUNTAINS?

Many mountain plants are well prepared to face cold and wind. Some would surely rather face an easier life in the lowlands, but they cannot compete with the higher-growing plants living there. Most mountain plants manage to compete for light and space only if they cling to the bedrock and gravel in the harsh high alpine climate.

The short summer makes it difficult for the plants to complete a cycle of sprouting, growth and seeding during the same year. Alpine plants therefore take two to several years to complete a life-cycle. Two exceptions are annuals: the tiny koenigia and the beautiful snow gentian A usual survival strategy is to flower early, e.g. in May-June. Species such as purple saxifrage, Scandinavian primrose and several types of willows do this. In order to win time it is not unusual that plants already begin to grow and photosynthesize while still under snow. This is possible because the sun's rays can penetrate up to 20-centimetres under thick snow cover. The flower buds even lie ready and waiting after they are formed the year before.

Due to the low temperatures the microbial activity goes slowly, and the release of nutrients to the soil from dead plants and animals takes a long time. To break down a little dwarf birch leaf takes bacteria and fungus several years of work. The scarcity of available nutrients can therefore reduce growth. In addition, the soil is thin and not good at holding water. Thus water shortages are common after the snow has melted away. Several species of saxifrage, such as golden root and glacier buttercup, have thick leaves in order to store water. Glacier buttercup also has antifreeze in its plant fluids, to hinder frost damage in summer. This can be necessary, since no other plant in the country grows as high up in the mountains.

At exposed growing places it is an advantage to be little, such as for moss campion and alpine azalea. The wind cannot get as good a hold on plants that grow near to the ground. Good packaging helps, also. Alpine hawkweed and one-flowered fleabane have "hair" in order to hold in the warmth and decrease heat-loss. Some flowers turn to face the sun and have the shape of a satellite dish. In this way they can best concentrate the heat on seed production.

What will happen with the plants in the high mountains if we get a change in climate with subsequent temperature increase, the so-called "greenhouse effect"? At the research station at Finse experimental studies have been carried out to find out what might be the result of higher temperatures. One of the plants, star saxifrage, has been observed for several years under controlled conditions, where the temperature and light have been changed.

Star saxifrage (image) is a plant that often grows in moist areas near snow fields, preferably near running water. Such conditions cause it to flower relatively late, often during the latter part of July, with seed maturation in the middle of September. Artificial temperature increase caused the star saxifrage to develop more quickly. All of the stages in the life cycle took less time. The size of the flower increased, and seeding was more effective. But, the greenhouse effect will not only cause an increase in temperature. With increased temperatures one can expect more cloud cover in the summer. The effect of this was studied by shading for light, at the same time as the temperature was held high. Decreased growth was observed and fewer seeds were prepared by star saxifrage that grew in the shade as compared with plants that were not shaded. This shows that light is a very important factor for alpine plants.

Climate change with high temperatures will perhaps give a short-lived upswing in the form of increased growth and seeding. But, in the longterm, these alpine plants will face hard competition for nutrients, light and space from larger plants like bushes, heather and grasses. The result can be that the star saxifrage and other smaller species will be pressed higher up into the mountains, with less space to grow.

A koenigia plant lives only in summer. In order for the species to continue to live in the same place, it must set seed, preferably releasing as many as possible. The koenigia has little time for flowering and seeding since it grows where there is much snow and the season is shortest. The advantages of growing here are little competition and good conditions for germinating on the bare soil. Koenigia is daring and takes a chance on the uncertain conditions of the high mountains.

Hardangerjøkulen is not among the biggest of glaciers, but it is a mighty sight when it emerges between the mountain slopes and high peaks above Finse; such ice caps once covered large portions of the country. Blue ice is its own universe, with a spectrum of forms and colour tones.