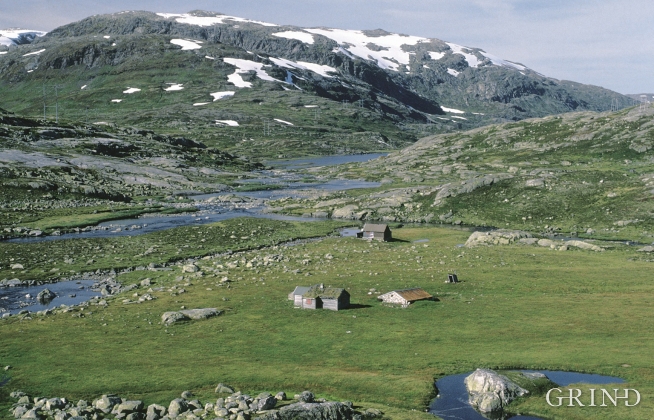 When today you speed past on the train on the Bergen railway between Hallingskeid and Myrdal, it is difficult to imagine that up here on the bare mountain was one of the great marketplaces and meeting places in the traffic between east and west. But this is a fact. Grøndaøsmarknaden was situated by the old traffic artery between East and West Norway, in Øvre Grøndal, just above Osa mountain pasture. This is a point of intersection for the traffic. To Hardanger the mountain road crossed over Osa, to Voss across Vossaskavlen and to Sogn across Sygnaleitet. The shortest way to Hallingdal from the west was across Osa. Remains of a market building is still visible.

An hour’s walk from Grøndal there is a large expanse of stone-cleared field at a height of 1100 metres above sea level, perhaps as large as 10 acres. This is Hallingskeid (skeid: an expanse for competitive riding or running). What is the oldest of the games meetings at Hallingskeid and the marketing place in Grøndal is difficult to say. Perhaps the marketing place can be traced back to the first centuries after Christ, and perhaps the Grøndal market came to an end in late Middle Ages, after the Black Death.