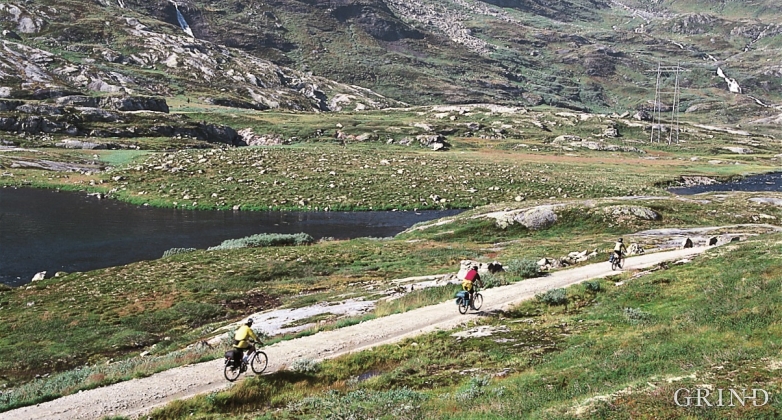 THE GEOLOGY ALONG RALLARVEGEN ROAD

They rest there, all as one, the silent witnesses of Western Norway's saga of creation: Precambrian basement, phyllite and thrust sheet. In the end came the glaciers and sculptured the vast landscape. Along the ground or on the horizon, from bicycle or on foot - the landscape tells its story - and it tells it clearer on Rallarvegen than many other places.

The road runs far down along the side of the valley, to where Precambrian basement is the most prominent rock type. Further up the bedrock is encircled by phyllite, and above the phyllite lies the thrust sheet, e.g. in Hardangerjøkulen, Hallingskarvet and Storskavlen.

From Finse to Hallingskeid, the distinctive Finse granite dominates the bedrock. Above Hallingseid the granite is naked and clean. The ice did not leave many loose sediment in this area when it melted back about 10,000 years ago. At the end of the last Ice Age the highest knob of ice lay near the water divide at Fagernuten, and the glacier sent an arm down toward Flåmsdalen valley. Glacial river plains were deposited in front of the glacier as it melted back - first at the river inflow to to Lakes Reinungavatnet and Seltuftvatnet (in Aurland), and then directly south of Lake Klevavatnet, on the border to Ulvik. The glacial river plain at Klevavatnet is especially distinctive, with large, white stones at the surface nearest the river pool (picture above to left), where the front of the glacier must have stopped for a time. Traces of the river channel are easy to see at the surface. Such river plains make good tent spots, since the rainwater usually soaks well into the ground. On the delta there is a rectangular block of granite from a stone quarry nearby.

At the same time that the glacier reached Klevavatnet, it sent an arm into the valley to the west, where Lake Øvre Grøndalsvatnet now lies. After scrubbing together a moraine ridge in the innermost part of the valley the glacier dammed up a lake. The shoreline from this ca. 10,000 year-old lake can be seen on both sides of the valley, but best on the south side. On this old lake bottom there is a whole series of moraine ridges, 14 in total. This serial production occurred because the glacier, as it gradually melted and the front moved back, stopped time after time with its front in the lake and shoved together moraine ridges under water. The ridges lie on both sides of the river, but are largest on the south side.

There is one more trace of the glacier that lay on the east side of Nedre Grøndalsvatnet, just below Rallarvegen. It is a so-called "esker" . The esker was deposited at the bottom of a meltwater river, in a tunnel under the ice. The deposit was laid down at the end of the melt, when there was no more movement in the glacier. When the ice around the tunnel melted away, the gravel collapsed on either side, such that a sharp ridge was created in the landscape.