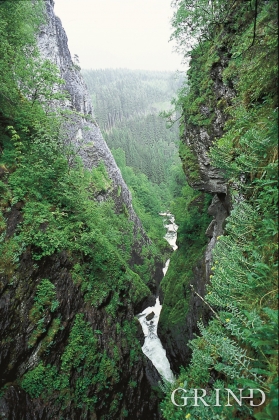 "THE LAND ROSE UP"

The ice cap that covered the land during each of the 40 past ice ages over the past 2 million years of Earth's history pressed down the crust of the earth - like a finger on a rubber ball. And when the ice finally loosened its grip 11,000 years ago, the earth's crust rose again, most where the ice was thickest, least where it was thin, quickly in the beginning, and later more slowly. To this day, the land in the inner part of Norway continues to rise by perhaps one millimetre per year. By and large, however, the crust in Hordaland has again reached equilibrium after the weight of the ice was removed.

Evidence of these movements is easiest to read from old delta flats that now lie high above sea level. Ulvik has the height record for Hordaland county. That this is the case is due to two conditions: First and foremost, the rising of the land here was considerable, but in addition, it was positioned such that the sea could come in early and make its mark on the landscape. In comparison with the other fjord villages in Inner Hordaland, the village of Ulvik was ice-free relatively early. This allowed the fjord to come into Ulvik while glaciers still lay in the fjords of Osa, Sima and Eidfjord. Therefore, the marine limit, the highest level the sea reached after the ice disappeared, lies at the record height of 125 metres above sea level here. However, the total rise of the land further east was somewhat greater than in Ulvik, because the ice masses that had pressed down the land were thicker than to the west. But since the fjord came in to Ulvik earlier, the building of delta flats in this village got a headstart and its neighbours in the east could not catch up.

After the ice had melted back, the land rose probably as much as 10-15 centimetres per year in the beginning. Whirling meltwater rivers carved out deep canyons: Ramnagjelet and Sysegjelet, and deposited sand and gravel in the delta which now appears as terraces high up on the hillside. Farther out, fine-grained sand and clay were deposited on the bottom of the old fjord. The meltwater rivers first created two deltas, at Tunheim outside of Sysegjelet canyon and Hydle outside of Ramnagjelet canyon, which today lie at about the same height, 125 m a.s.l.

The canyon on the valley sides above Ulvik village is quite large in comparison to the land masses in the terraces below the canyon. This suggests that the canyon must have been dug out not just at the end of the last Ice Age, but also during earlier ice ages. Sediment from these ice ages was shoved ahead by the ice, far out into the North Sea. Only sediments from the end of the last Ice Age remained at Ulvik, and they will remain here until the glaciers of the next ice age sweep them away.

The narrow canyon is a typical result of river erosion, probably from the glacial river under the ice. Ramnagjelet canyon has the largest river, Tysso, while Sysegjelet canyon now has only a little stream. The river that carved out Sysegjelet must have come over the pass, 40 metres higher than today's level in Lake Solsævatnet.

As the land rose the rivers carved down into it. Some of the rock mass that were removed when Ramnagjelet and Sysegjelet were created occur as sand and gravel in the terraces in Ulvik. They must have been very unruly meltwater rivers, to chisel out such a deep ravine. Today there is only a small dribbling stream in Sysegjelet. (Svein Nord)

Cross section along the Tysso and along the sides of the Tysso showing how the land has risen in Ulvik since the last Ice Age. (Inge Aarseth/Eva Bjørseth)