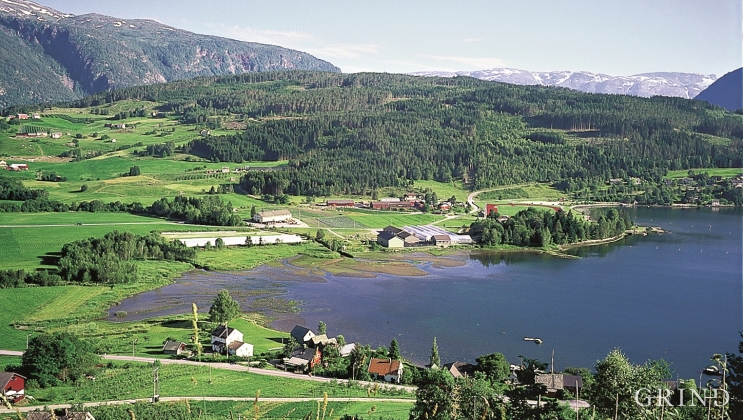 When the lush beach area innermost in Ulvikapollen was protected, the bird life was instrumental to the decision. The plant diversity is just as impressive. In Hordaland sea meadows such as this are rare small in size - they are more common in coastal environments.

A sea meadow is a gently sloping beach with pasture vegetation on loose sediment deposits. Though they tend to be naturally small, these characteristic ecosystems have been made even smaller many places because of farming or other development. Those that are left in the fjord country are most often found in brackish water areas on a delta.

In Ulvikapollen the outer zone of vegetation gets flooded with tidewater. Here, several common beach plants grow, including brackish-mud rush, slender spike rush and sea milkwort. On this fine-grained bottom the rare species horned pondweed is abundant. Other rare plants include grey club rush and two species of sea grass. In the tidal zone there is lush swamp vegetation with, among others, iris, golden loosestrife and meadowsweet.

The birds are not especially interested in these rare plants, except for the ducks and swans who will happily graze on the sea grasses. Ulvikapollen is a good nesting place for wading birds such as the Lapwing, Red Shank and Snipe. A pair or two of Oystercatchers also nest in the sea meadow. Red-breasted Mergansers nest further out in the fjord, but come to Ulvikapollen with their youngsters. The area produces a lot of insects, which often attract swarms of swallows and swifts who harvest the water surface. The swifts are believed to come from afar - their nearest known nesting place is at Vossavangen.

It is in nesting time that Ulvikapollen is most popular with the birds. Many ducks find a good resting place here, and periodically a flock of Canada Goose stop off, and swim around in the fjords in Inner Hardanger. The shallow beaches are good fishing spots for the Grey Heron. The most numerous bird of all here is the Common Gull. Gulls from near and far gather in Ulvikapollen in the hope of finding a tasty dinner.

At the plant school south-east of Ulvik Centre a little house has been built with free access for the public. Here, you can find information about the preserve, while you stand close to some of the birds. If you are lucky, you might be able to spot a rare species. Ulvikapollen is one of the places in Inner Hardanger where rare species most often turn up.

The Nutcracker is only found in five main areas of South Norway. One of the five is some of the valleys in inner Hardanger and Voss. One of the surest places to see this rare bird is on the slopes around Ulvikafjord.

The Nutcracker builds its nest in dense stands of spruce, and in spring it eats a good many seeds from the conifer tree. But it is hazelnuts that are its main menu, and they gather large amounts and store them in hiding places in the ground. Many birds have problems finding their stashes, but the Nutcracker generally finds his, even under thick layers of snow! The bird is easiest to see in the autumn, when the birds fly hectically to and fro in search of winter supplies. They sometimes fly 15–20 kilometres in order to find enough nuts. The species is not abundant on the steep slopes of Hardander - there is not enough territory for this.

The Nutcracker stays more or less at the same place, and it will really get desperate before it will embark on a journey. Some years, as in 1968 and 1995, western Norway was invaded by Nutcrackers. This is a Siberian bird, that otherwise lives on seeds from the Swiss pine species. It is when the seeding of this pine fails that the Nutcracker travels so far.