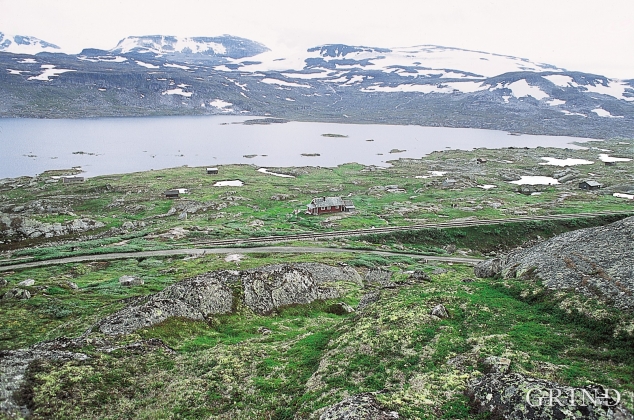 THE LIME OF LIFE AT NORDRENUT

It must have taken a long time for the snails of Finse to make it to the mountains; six species have been found as high as 1470 m a.s.l. For the snail species with an outer shell, it is perhaps not the mountain climate that is the biggest problem. It is probably worse to find a place with enough calcium in the soil to make their shells.

Therefore, the snails of Finse stay mainly on the south- and west-facing slopes in the calcium-rich phyllite bedrock, where willow and vigorous tall perennials tend to grow. Nordrenut is such a place, and because of this it is a known research locality. All of the snail species of Finse can be found at Norenut.

A snail generation in the mountains is likely to take longer to complete than in the lowlands. The species Vitrina pellucida (small picture to right) has a one-yearly life-cycle in the lowlands, that is, that all phases from egg to larva to full-grown individual, are completed in one year. In the high mountains, this cycle is two-yearly, possibly three-yearly some places or in unfavourable years with low temperatures. This is an adaptation to a short growth season and sparse living conditions otherwise, a common strategy among the invertebrates of the high mountains.

The Arctic fox used to be common at Finse and other places on Hardangervidda. In Ulvik police district during the lemming year in 1887, prizes were awarded for the shooting of 137 foxes, and of these, 126 were arctic fox. The arctic fox was protected in Norway in 1930. However, some animals were still killed. In the period 1960-75 at least 8 animals were shot in the Finse area, while 10 arctic fox got run over by trains.

When the Lågheller tunnel was built in 1993, the arctic fox was a regular visitor in the fallow village. They ate tidbits from the construction workers when food was scarce. The arctic fox has been in hard times at Finse for a long time - it is doubtful that the last arctic foxes here would have managed if they hadn't regularly patrolled the railway lines in search of garbage that had been thrown off the train. After the railway cars got equipped with self-contained toilets the food offerings were further reduced. Today Finse does not have any permanent arctic fox, and the species is recognized as the most threatened mammal in Norway. (Roar Solheim)