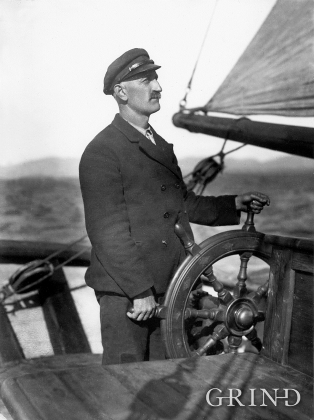 When Anders Paulson Wallevik (1874-1965) took over the sloop “Haabet” after his father around 1900, he established a wide-ranging business, merchant, steamship agent, post manager, ship-owner, sloop skipper – and photographer. Without doubt it is as photographer he has left his mark.

Anders P. Wallevik ran freight traffic, sailed on North Norway and to the Baltic Sea, and came into contact with many people. This contributed to giving him an eye for special features and human types. He became interested in photographing as a young man, when he worked at Brakanes hotel in Ulvik. He had an aptitude for the profession and soon became a skilful photographer. Most of the pictures he has left are from the period 1905-35, but it was only through studies in Germany in 1918-20 that he received formal training. He obtained a gold medal at an exhibition of photography in the 1920s in Germany.

With the simple, fairly primitive equipment he had at his disposal, it is almost incredible that he obtained such quality in his pictures, well composed and razor sharp. He did not have a studio, and he became a master in making use of the background at hand. For darkroom he used the old house at the farm. Electricity did not arrive at Vallaviki before 1958, and his darkroom lamp was therefore a paraffin lamp with red-coloured glass cover. But just as now: it is the person behind the equipment who decides the quality. Some of Wallevik’s pictures are to be found in this book.