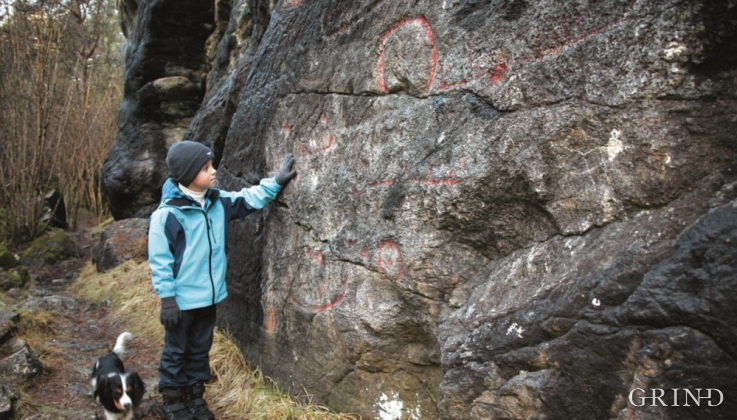 At the bottom of Vargavågen on Halhjem lies Grødalshaug, a 30 metres high rocky outcrop between the bay and a moist valley cleft. On the south side of the rock is a steep rock cliff facing the valley, the bog and the stream. On this rock face we find rock carvings from the Bronze Age.

In the Bronze Age the sea was higher up than at present, and the boats travelled further into the bay. If you go around the bay, preferably at low tide, and continue for a short distance in a south-westerly direction, you suddenly find yourself 3000 years back in time. On the vertical rock-face 16 figures and 21 shallow depressions have been discovered. The figures of ships are the dominant features and all of 13 ships can be made out, some of them clear and distinct, while others are disintegrated, to leave only fragments visible. The ships are drawn as a single keel-line with bent sterns and short, vertical lines, which perhaps depict the crew.

In addition there are three simple ringed figures. Two of them have a shallow depression in the middle. The shallow depressions are otherwise spread over the area, between the ships and the rings without any clear pattern.

The rock paintings at Halhjem belong to a group of rock art known as agricultural rock paintings, and which are dated to the Bronze Age (1800-500 BC). The figures are there, clearly, and they give us a glimpse into the magic world of the Bronze Age. It may be figures related to growth and fertility that we observe here. Both the boat figures and the rings, the sun symbols, are interpreted as belonging to such conceptions. When the hunters in the Stone Age settled down to farming, it was important that the corn grew in the field and that animals - and humans alike – were thriving. Perhaps the place itself, and not just the figures, was holy, and here, in the quiet wood, without our own time pressing on us, the question easily arises: Who made these figures? Were sacrifices made at the mound? And were there holy celebrations and rituals?

A little bit further on, in a southerly direction we find the place of habitation below the rock face. This is where people have found shelter for wind and weather. Were they the same people who worshipped the magic figures here? Or were they fisher folk from time past who sought shelter? We will probably never know the answer.

The type of rock in Grødalshaug is steatite, and steatite has been taken out of here in former times. At several places in the rock-carving area it is possible to see signs of stone quarrying.