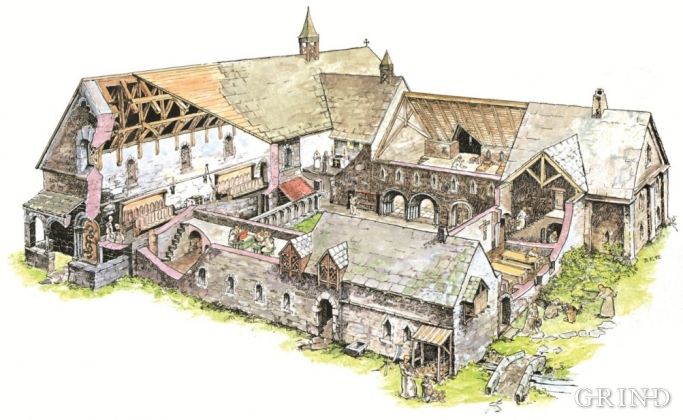 This is the artist’s impression of how he imagines the monastery site may have looked. We know the plan of the site, but there is still a lot we do not know. Where documentation is lacking the artist has added a combination of imagination and analogous deduction from other Cistercian monasteries in Europe. In later years fresh traces of buildings have been unearthed outside the site where the ruins are today. During the reconstruction of the part of the colonnaded passageway that stands today, the column capital was turned the wrong way. (Bernt Kristiansen).

Lyse was founded in 1146, as a subsidiary to Fountains Abbey in Yorkshire in England. Bishop Sigurd of Bergen headed this effort and provided means to the monastery. There was close contact with the parent monastery in the initial period, and up to 1200 there were probably English abbots at Lyse. During the late Middle Ages the monastery came under Sorø monastery in Denmark, it had formerly been under Alvastra in Sweden for one year. Lyse – one of the richest in the country – was closed down between 1537 and 1541 and was put under the crown.

The buildings were constructed partly in steatite from a quarry northeast of the monastery site, in the Lyse valley. When the monastery was pulled down, steatite was transported from Lyse to the construction of the Rosenkrantz tower in Bergen and Kronberg castle in Denmark.

“The sun stands still above Gideon’s valley. The time has lost its Bearings…” The Danish teacher in Folk High Schools Jørgen Bukdahl gives us a glimpse of a compressed impression of monastery life in Lyse valley, as he sees it through his inner eye, on a sunny summer’s day when the light plays amongst the rich leafy branches around the monastery ruins. Today a well-kept cultural landscape surrounds Lyse monastery as inheritance of the monks’ industrious efforts – “ORA ET LABORA”. The brothers cleared forest, dug ditches and cultivated large gardens around the monastery. Lyse also had a large fruit garden at Opedal in Ullensvang. Further in the Lyse valley the old path –“the Monk Path” – passes over the hill to Røykenes; the road to Bergen.

The plans on the right are based on Johan Meyer’s plan of Lyse after the excavations in 1888-89.  Different shades indicate different periods of construction (no shading: only foundation). Perhaps the monastery also had a western wing. The site was restored in the 1920s. Some of the walls have been reconstructed with the help of narrow slate tiles.

2.The chancel for the monks.

4.The chancel for the brothers.

7.Stair house for the “night-stair” from the dormitory.

10.Access from the colonnaded passage to other buildings further east.

12.Stair house for the “day-stairs” from the dormitory, probably with the prison below.

15.Probably dining room for the brothers, perhaps a part of the western wing.

16.The monastery atrium and the colonnaded passage with a shelf for books (armarium) at the sacristy).

Monotonously the old Maria hymn ascends from the monastery church. The monks and the brothers are gathered for the last prayer of the day, before they retreat to their own quarters.

This is how we may imagine it was back in the time when the monastery at Lyse was a vibrant community, at the height of its power. Lyse belonged to the Cistercians order, and like all the other Cistercians churches, this one was also dedicated to Mary. There has probably been a Maria altar at the north wall of the church, halfway down the nave, where there are remnants of an altar foundation.The Cistercians order developed in France towards the end of the year 1000, as a stricter variant of the Benedictine order. The name is derived from the monastery in Citeaux. The monasteries were built in isolated places, and the days were divided between prayer times and masses, reading of inspirational texts and practical work.

A lot of poor and boggy soil was cultivated and transformed into flowering meadows and gardens by the monks in “Vallae Lucidae” the Lyse valley. This was part of the theology and the social philosophy of the Cistercians. The brothers, who were responsible for the largest part of the practical work, were subject to a less strict monastery discipline than were the monks. There were 7 fixed prayer times every day, the first one an hour after midnight. At this time, the monks, and later also the brothers, used their respective “night-stairs” that led from the dormitories down into the church