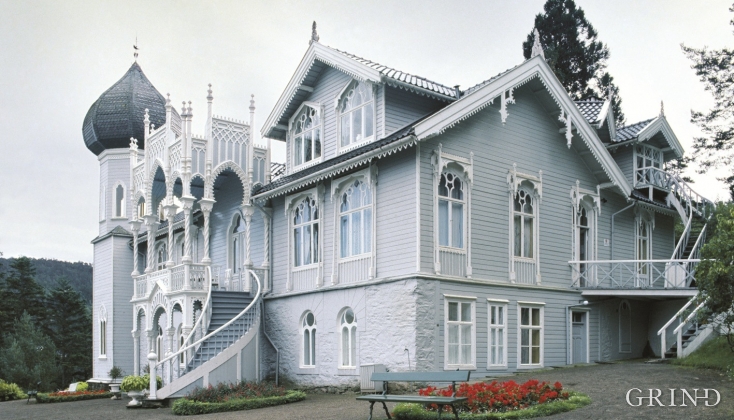 It is assumed that it was the head of communal building and planning  Conrad Fredrik von der Lippe who designed Lysøen. (Helge Sunde).

Lysøen, this fairytale castle with its Russian-inspired onion dome on the corner turret, stands as a reminder of the diversity of the period called Historicism and a monument to a versatile artist; a key figure in the Norwegian National Romanticism.

Ole Bull visited Lyse monastery for the first time in 1826, and already as a 16-year-old he was fascinated by the place. In 1872 he bought Lysøen from his childhood friend, antiquarian Nicolay Nicolaysen, for 600 Speciedaler . The following year, in 1873, “Villa Lysøen” was already built. He started using the house as a summer residence. It is certainly Ole Bull himself who had gathered impressions and impulses on his many travels for this fantasy villa with the large music room in the Moorish style. “My little Alhambra” Ole Bull called Lysøen. The island itself is an expression of the feeling for Nature inherent in National Romanticism. Paths covered in white gravel lead up to the highest peak, with wide views of the fjord landscape.

Ole Bornemann Bull was born in 1810; the son of an apothecary in Bergen, who became a national hero. He wanted to become a musician, and already as a nine-year old he played in public for the first time. In 1830 he travelled to Paris to create for himself a future as a violinist. After a concert in Bologna four years later, he could ask whatever he wanted for a concert performance. He had obtained the position as perhaps the best violin virtuoso in the world. During his entire adult life Ole Bull travelled extensively on concert tours, especially in Europe and the USA. Ole Bull was a child of his time; National Romanticism. “Ole Olsen, Norwegian man from Norway”, he called himself. He wanted to promote Norway abroad, and no Norwegian became so well known world wide as Ole Bull in his time. Around 1850 he started Det Norske Theater in Bergen, the first theatre in Norway that used the Norwegian language. One after the other he placed Henrik Ibsen and Bjørnstjerne Bjørnson as directors and leaders of the theatre. From the 1850s to the end of his life, Ole Bull lived for the most part in the USA. In 1872 he bought Lysøen. This is where he lived every summer, and this is where he died in 1880.

Ole Bull had a strong interest in popular cultural traditions, not only folk music. When Lysøen was completed, he called on a gifted painter Annanias Tveit (1847-1924) from Hegglandsdalen in Os. He was also a gifted rose painter, one of the most famous of the Os painters in the last half of the 19th century. He developed the Os style to its highest point with colourful roses and architecture on a light base. When he was finished at Lysøen he took the motif along and used it on his colourful chests, a rare contact between National Romanticism and the popular cultural environment, and a unique work in European popular art.