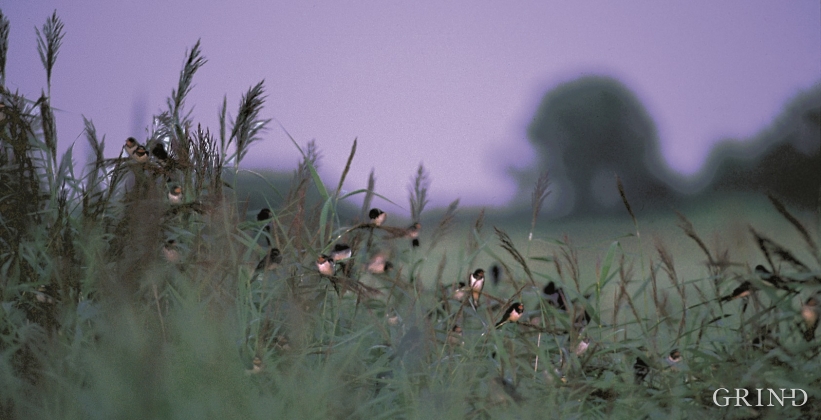 Gathering place for barn swallows – in the reed beds of Lake Ulvenvatnet on an evening in late August. (Ingvar Grastveit)

Lake Ulvenvatnet is thought to be the most species rich wetlands in the municipality. Despite this, the area is not protected, nor is it likely ever to be.

Even though there are many species, few of them are abundant. For example, only a few mating pairs of Eurasian Teal, tufted ducks, Mallards and Red Shank are found here. The Lapwing is more common. In addition, a pair of the rare Coot have sometimes nested here. The Mute Swan has also tried its luck at Lake Ulvenvatnet, the only place in Hordaland where it has attempted to nest. Some people maintain that rare birds like the Spotted Crake and Little Grebe also have once nested here. One of Hordaland's largest colonies of nesting sand swallows was previously found at a sand pit at Ulven. But after the sand pit was dug out the swallows disappeared along with the sand.

Lake Ulvenvatnet is more important as a migration locality than as a nesting place. In late autumn several tens of Snipe can be seen resting on the marshes by the lake. The rare Jack Snipe is more common here than any other place in Hordaland. But, this species will never be very common, given its behaviour. Sometimes it is so reluctant to move that it gets trampled on.

There is a high production of midges and other insects at Lake Ulvenvatnet , but this is rarely a nuisance for hikers. The insects tend to fly high - as can be measured by the swallows hunting them intensely at dusk. Several unusual species of dragonfly have also been found, as well as some that probably have never been described. Lake Ulvenvatnet is fertile, with vegetation all along the water's edge. There is a thick belt of reeds in the middle of the north side of the lake, and this is where the birds prefer to sleep. Food is found other places. The birds get their most important nourishment from wherever the extensive aquatic plants water horsetail, beaked sedge and great bulrush grow.

The bird life has adapted to living in the proximity of a military practice area, but the terns that nest on an islet in the north end of the lake are better able to steer clear of the noise. Neither did the barn swallows seem to be especially keen when their night's sleep was disrupted by cannon fire at the Ulven camp. By the way, one fat carp leaping in the water can sometimes have the same affect on nocturnal peace.

Gathering place for the barn swallows

It has been understood since the 1960s that Ulvenvatnet has an unusually rich bird life. But it was not until 1993 that anyone discovered the vast amounts of barn swallows overnighting in the reed belt in the middle of the lake.

Banding of the birds has shown that the swallows come from a large area, from Husebø in the north to Time on Jæren in the south. Their overnighting begins in July and continues until the middle of September. It is usually the young birds from that same year that gather here. These are immature birds, who had to leave home when their parents began to raise their second flock of youngsters for that year. At these meeting places they gather experience and strength for eventually finding their way all the way to South
Africa, 10,000 km away, without any help from others who have been there before.

Lake Ulvenvatnet is one of the most important of the 35-40 overnighting places for barn swallows in Norway. Some evenings there can be between 5,000 and 10,000 birds gathered here. There is thought to be a lot of traffic between Ulvevatnet and Purkebolvatnet in Austrheim, about 90 km away. Therefore, the numbers can vary a lot from year to year, and day to day.