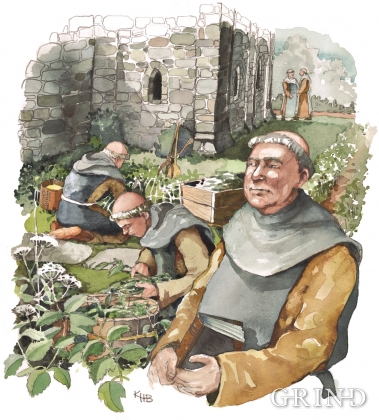 Lysekloster was the largest agricultural property in the country when it was phased out during the Reformation in 1537. In its prime this cloister encompassed two-thirds of all the farms in Os. The monks introduced and cultivated new plant species and it was probably they who stocked the waters with fish not indigenous to the area. This legacy from the Middle Ages has left a lasting mark.

The monks of Lysekloster had a lot of contact with other countries, especially England. They imported and grew different types of plants in the cloister gardens and these spread to other parts of the country. The first fruit orchards in Hardanger were planted by the monks, since they once owned the farm Opedal in Ullensvang. Today it is difficult to say exactly which plants they imported to Norway, but perhaps garden-owners of today can thank the monks for the issues they have with bishop's goutweed. Bishop's goutweed was grown in the olden days as a vegetable and medicinal plant. Freshly crushed leaves have been used as a remedy for treating sores and rheumatism. This umbellifer was associated with vicarages since early on, and some places, such as in Ullensvang, it was known as "Bishop's cabbage". The monks also knew how to utilize the land outside of the cloister gardens; they planted and maintained the forests and also developed grazing land. The cultural landscape surrounding the cloisters is essentially as old as the cloisters themselves.

Among the most valuable for the monks was the salmon fishing in Oselvo. Fishing rights was a hefty point of conflict between the farmers along the waterways and the monks. At the beginning of the 1300s the abbots claimed all of the fishing rights, and closed off the river with fish-catching devices made of fences that are called "laksegardar". This turned out to be illegal, and the abbot was expelled. Similar disputes arose with regard to the freshwater pearl mussel in the rivers.

Several species of fish from the carp family (especially the Crucian carp) are very hardy and tolerate transport over long distances. There is a general impression that the carp and Crucian carp were imported by the monks, but concrete evidence of this is lacking. In the 1700s and 1800s it was usual to have fish ponds as garden décor, perhaps also as a source of food. The Danish theologist Pontoppidan wrote that attempts were made to import carp to Bergen before the 1700s. But, the monks had left Lysekloster long before then. It is nonetheless notable that the places in Hordaland which still have these fish species are just the places where the monks were most active.

Soapstone was often used in the Cloisters. Some of the stone was mined from a small quarry in the vicinity, roughly 500 metres northeast of the ruins. Soapstone has also been transported by sea from other Middle Age quarries, perhaps from Vargavågen and in Kvernes and Ådland in Samnanger. After the reformation the cloister buildings were torn down. The soapstone was recycled, and used, for example, in the Rosenkrantz Tower in Bergen and Kronborg Castle in Denmark.

This plant tastes bitter, and during the Black Death it was used as a magic remedy against the plague. Butterbur is known in Hordaland from Fjelberg, Fusa (at the cloisters), Odda, Kvam, Os, Fana, Alvøen and Bergen. It is found growing wild along roadsides and in places where garden refuse has been dumped.  In Norway only male members of the species have been seen.

This plant grows in areas with good soil, many places where there have been cloisters, in addition to in old gardens, along roadsides and lining fences. It has a notable smell and taste of anise.

This plant grows in abundance right by the cloister ruins at Lysekloster. Its normal distribution otherwise is in the Alps. Masterwort is rare in Norway, but in Hordaland it is known from Bømlo, Stord, Tysnes, Kinnherad, Os, Fana and Osterøy. The plant was considered by the Romans to be a universal remedy that "healed all sores, enabled the blind to see and turned old men back into youngsters".

This plant is not found today in Os, but in Tysnes and Opedal among other places. Some think that baldmoney might have been imported to Norway by the monks.