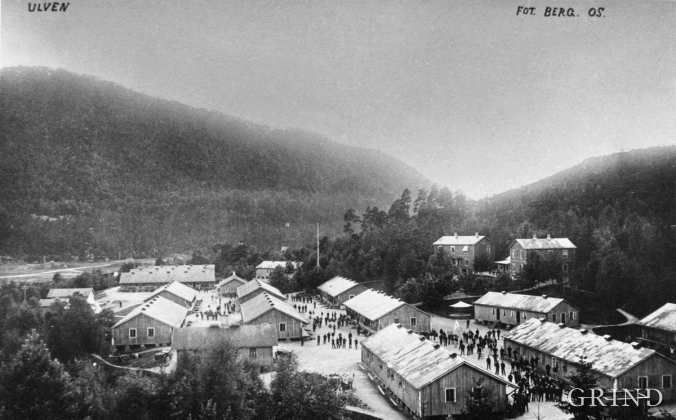 Ulven, at the north end of the Ulven lake, is an old farm. The name is probably derived from alfr (“gravel, sand”) together with –vin: the farm on the large sandy expanse. The neighbouring farm to Ulven, Kuven, also has a –vin name. This is a more fertile farm, and is clearly expressed in the name. Kuven comes from Kornvin: “The corn expanse”.

Ulven was left desolate following the Black Death, but was again taken into use in the last part of the 1500s. The farm was under Lyse Monastery up to 1873, when the state took over as its owner and moved the military exercise ground here from Osøyro.

When the Military took over the farm Ulven, the owners had to move out. The large sandy field at Ulven was especially well suited for military exercise, and the military activities were moved from Osøyro to Ulven. Ulven Camp was developed as training camp for soldiers from the Bergen area.

Søndre Bergenhusiske Infanterregiment No. 9 was established in 1911, and up to WWII the summer recruiting school and regiment gatherings were the most important activities at Ulven. Ulven became one of the best known Norwegian prison camps during WWII.

The administrative centre for Hordaland Infantry Regiment No. 9 is still situated at Ulven, and after the war the camp has been mostly used for refresher courses and home guard training. From 1990 a recruiting school has again been established at Ulven.

With the good conditions available here, Ulven has become one of the fixed venues for the Norwegian National Marksman Gathering.