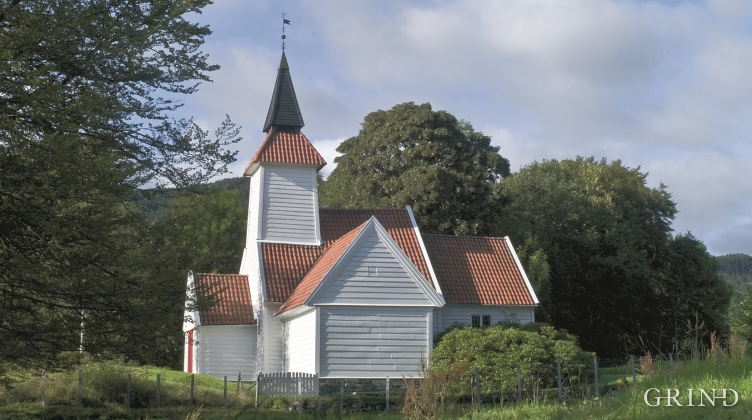 The small white-painted chapel with the red brick tiled roof just south of the monastery ruins at Lyse was built in 1663 as a local chapel for the monastery estate, following the takeover of the property by the District Recorder (Stiftskriver) Niels Hanssøn Schmidt two years previously. The chapel, with its harmonic proportions, lies in the cultural landscape beside the grand monastery estate, witness to a time gone by. But even today, there is a tradition of high mass on the 2nd day of Ascension in Lyse Chapel.

The chapel is a small timbered church, with the church vestibule to the west, and a high steeple built on the western part of the nave. Small lead-framed windows let the light into nave and chancel.

The church interior has remained more or less unchanged in the course of 300 years. Floor, walls and barrel-shaped wooden ceiling are unpainted, as are the church benches also. The altarpiece in baroque style, dated around 1670, was, according to accounts, rescued out of the hospital church at St. George, which burned in the town fire of 1702. Before the fire the altarpiece had already been obtained by the owners at the time, Jacob anderssøn Widing and his family, who owned Lyse monastery estate from 1699 to 1722. The altarpiece has this inscription: “For the honour of God and adornment of the Church; St. Jacob Andersøn, Anne Michel’s Daughter1703”.

Appointments to visit the chapel must be made with the owner of Lyse monastery estate.

After the Reformation the monastery and all its property was counted as property of the king. In 1670 the estate fell into private ownership, and around fifty years later Hans Formann bought Lyse monastery. In the time of Henrik formann (1758-1815) the estate owned 200 farms from Ryfylke to Nordfjord, and had 5-600 tenant farmers. His son, also called Henrik, bought even more farms, and at the end owned three quarters of the entire rural community at Os. When he died, all the farms that did not belong to the main estate, were sold. Most of them were sold to the lease holders.

A grand, double-winged main building was erected by Hans Formann in 1722-24, with flower-decorated canvas wallpaper in the main living room and ornate stone fire places from the 1600s. This building was pulled down in 1939-40, and was meant to make way for a new one. When the war came all these plans were shelved. The large stave shed from late Stone Age is also gone. One of the staves had the year 1519 inscribed on it.