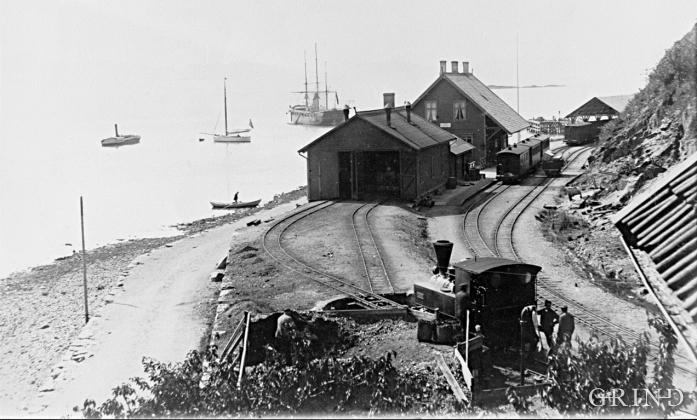 On Sunday July 1st 1894 the Nesttun-Os railway was opened. “On the platform Consul Gade wished the railway the best of luck, whereupon the first train departed from Osøren to Nesttun at 9.15 in the morning” as the entry says in the board logbook. On the platform was the largest gathering of people ever seen in the Os community and in the first year the rush of curious people was so great that the railway board introduced a “platform ticket”.

The new station building was built just outside Osøren hotel. Immediately beside the hotel was the turntable for the railway engines and the coal pit where they loaded the coal. This led to the first “pollution case” in Os; the hotel owner complained of considerable nuisance from smoke and noise from the station and the court agreed with him.

Today the turntable is placed below the asphalt, but the station area, with the station building, the engine hall and the engine workshop, is unaltered. The engine hall, which was built in an open iron column structure, was added to and extended some years after the opening of the station. The Os railway transformed communications in the Bjørnefjord communities. Suddenly the town was only a few hours away, and the transition from sea to land belonged to one of the greatest chapters in Norwegian transport history.

When the Nesstun-Os railway was opened in 1894, the new railway connection was looked upon as “…the most up-to-date Connection between Bergen and its best Hinterland…”
This was true. Travelling time between Os and Bergen, which took 4 hours by steamer, was halved. Agriculture was brought much closer to the large fresh food market in Bergen, and the town merchants obtained a new market in the rural communities. In the transition to money economy, this was important. Also for Ulven Camp the opening of the Os railway was a large step forward. Formerly, transport of soldiers and goods had to go to Buene in the Lyse fjord and from there via poor rural road further on to Ulven.

It did not take long however, before the railway was not so “up-to-date” any more. The railway had a narrow gauge, and plans to rebuild it to a wider gauge were never realised. In 1935 the last train left. Buses and lorries had taken over. Some valuable cultural artefacts are still left. Between Hetlefåten and Storestraumen there are still a couple of kilometres of untouched railway line in parallel with highway No. 1, with two typical bridges. “Such a landfill as can be seen out in the lake near Bergstøen, has apparently not its equal in the whole of Northern Europe” wrote O.W. Fasting after one of his early trips with the Os railway.

At Os station, the buildings are still left. In Fana, Stend station has been taken care of and restored.