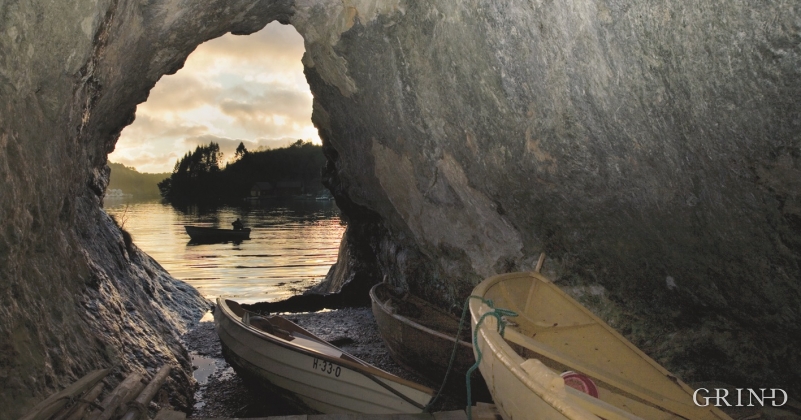 On the north-eastern part of Grødalshaugen there is a steatite quarry. On the rock wall itself there are chopping marks and traces of excavations for pots. In the front are the tips of refuse made up of chips of steatite and earth. Large amounts of steatite have been excavated, and judging by the form and size of the steatite stumps on the rock face, it is the form language of the Viking Time that speaks to us. Roughly hewn pots and bowls were probably transported down to the sea for freighting by boats out of the bay.

On the way out of Vargavågen lies Vargahola (the wolf’s cave), a large hollow in the rock wall just at sea level. Today it serves as winter storage place for small boats, and it is peace and quiet that characterise the place. But a thousand years ago, during Viking Times the place must have reverberated with the chopping of stone by masons and people in their boats outside. An entire steatite vein in the rock has been exploited, and the cave remains there as a secretive opening on to the past. Traditional folklore links the cave to the monks and Lyse Monastery, but the quarry has been in operation long before the Middle Ages.

On the hillside up above the bay, around one kilometre west of Vargahola, lies Katlaberget, as an impressive prehistoric industrial area in outlying fields. The rock face is patterned with chopping marks, and the large tip in front is impressive in its  size. The steatite industry in Vargavågen has been extensive and important. Steatite was an excellent material for building material and for pots and pans, as the very name katla, “kjel” (kettle) bear witness to.