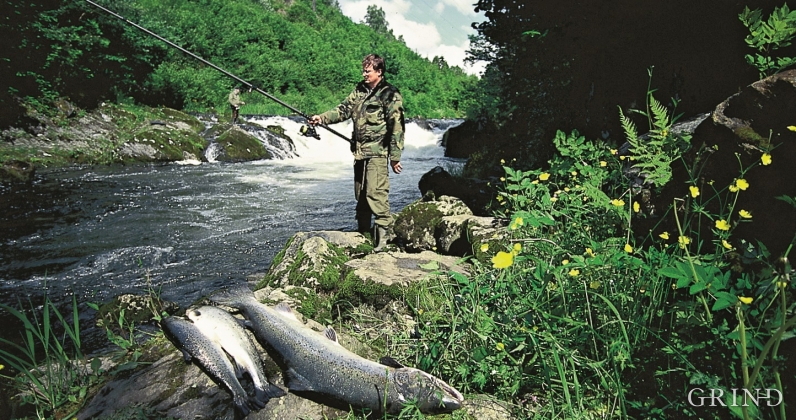 Oselvo is the biggest waterway on the Bergen peninsula, with sources in Gullfjellet and Sveningen. There is a fall of only 60 metres along the entire stretch from Samdalsvatnet Lake to the sandbank in Fusafjorden.  It is rare to see a river like this in western Norway. There is salmon along this entire section of the Oselvo river.

The Oselvo, rich in fish, has long withstood external threats of acidification and pollution. The river is especially well known to salmon and trout fisherman, since usually the first salmon of the year is caught here, a catch that traditionally was given to the Bishop.

The early increase in salmon is attributable to the catchment area of the river being in the lowlands, with an average elevation of only 200 metres above sea level. It also helps that there are many still areas in the river which serve as warming pools. The fish therefore seldom freeze, and the waters quickly reach high enough temperatures to tempt the salmon. For a long time the fishing season opened as early as April 1st, but today the salmon and trout fishing does not open before the 15th of June. This is because there has been a decline in the wild fish also in this river in recent years. The decline is thought to have been caused by salmon lice and escaped aquaculture salmon. It is uncertain whether the indigenous populations will be able to survive in the future.

Even though the salmon season has been sharply reduced, the Os river system is still popular among sports fishermen. Now freshwater trout and char are more sought after, and the trout can be quite large. Throughout much of the autumn boats can be seen on Lake Hetleflåtvatnet. Most of them are fishing for char, since this river is one of the chars' major spawning grounds. In recent years northern pike has also been observed in the Os river. This is a worry for many of the sports fishermen. No one knows when the pike got introduced nor who was responsible. There is also rainbow trout in the Os river. This is the only place in Norway where they wander freely between fresh- and saltwater, which makes them what we call in biological jargon an "anadromous" species.

The water levels in the Os river respond quickly to precipitation. This is particularly noticeable in the winter and autumn months when the river level rises rapidly when it rains and then drops quickly again when the rain stops. In the summer, however, larger amounts of precipitation are required before river levels change noticeably. This is because the surrounding soils and sediment deposits that have dried out due to evaporation in the summer warmth, first fill up again with water. (avsn. ev. til figurteks – se under)

The river system has been permanently protected since 1973. This is mainly to protect against development by hydroelectric power (the plant at Gåssand was abandoned in 1965). New guidelines stipulated that the technological development should also be forbidden of areas adjacent to protected lakes and rivers. The upper parts of the waterway are relatively little affected. But, the motorway follows the river closely from Røykenes to Søfteland and there are many houses, sometimes extending all the way down to the water.

Large areas of the Os river flow over ancient seafloor. At Tøsdal one finds fossil shells that testify to this. Perhaps living shells might be found in the river today? The Os river is the best known habitat for the rare freshwater pearl mussel. In due course, the oldest surviving Os-inhabitant could be a freshwater pearl mussel. This species can in fact live to be over 150 years old. But it depends - the river is more contaminated today than it was, and this species is very sensitive to pollution and high silt concentrations in the river bottom. If you find a specimen, leave it alone. It is a threatened species and has been totally protected since 1993.

Teeming with salmon that are waiting for a chance to swim up the river – from the bridge at Osrøyro, May 2nd, 2002. Three days earlier ,several tens of thousands of salmon escaped from an aquaculture farm in Fusa. (Ingvar Grastveit)