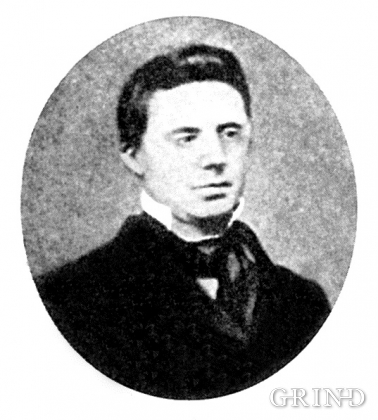 In 1791 it was decided that the company commanders in the army should be given state-owned farms. The main building at Undarheim was erected in 1792 as residence for the head of Søndre Sønhordlehnske Compagni. One of the best known officers who lived here was colonel F.W.Beichmann. He was a representative to the Storting in 1836-38.

At that time the surroundings were probably a lot more idyllic than they are today. The main house was a one-storey building with a beautiful entrance portal.

Jonas got to know the people in the rural area very well, and by and by he learnt the local dialect. Especially in the novel “Gaa Paa” (Keep Going), he used words from Sunnhordland. This novel is a close study of the conditions in a coastal community in Outer Hardanger, not least a lively period description of the great winter herring fisheries.

Later on, the head farm has had another storey added to it, but the portal, the steps and the beautiful garden is the same as in the 1850s, when the Lie family lived here.