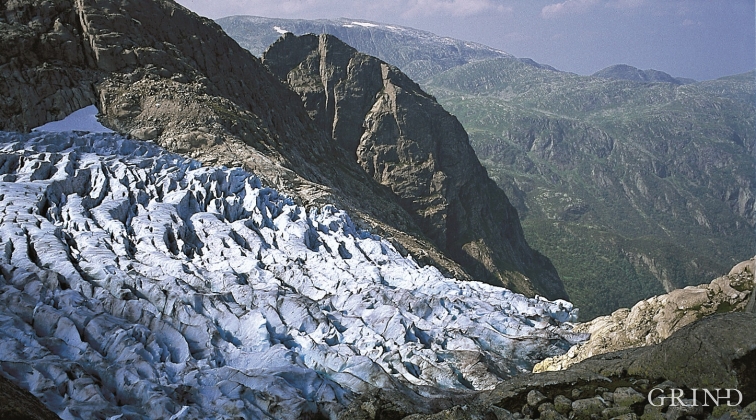 Glacier fall at Bondhusbreen. Deep crevasses in the picture that are a sign of quick movements. (Svein Nord)

The Bondhus area in Maruanger has been a magnet for tourists ever since the stream of tourists to Norway's west coast began in the middle of the 1800s. The magnificent landscape with the "ice trail" up to Bondhusvatnet Lake, the ice falls from Bondhusbreen glacier and Keisarstigen trail up to Folgefonna are still popular tourist attractions.

Bondhusdalen valley was formed under the Ice Age by glaciers from the area where Folgefonna lies today. Later, from about 7000 years ago, it was totally ice-free here, but then a colder climate set in 3000 years ago, and Folgefonna was formed. If we follow the valley upwards, we wander through a landscape that tells of changing climatic conditions and glacial positions.

At the bottom of the valley, from the parking lot, we can clearly see an end moraine. After the Hardangerfjor glacier calved back about 11 500 years ago, the glacier at Bondhusdalen valley Advanced and deposited this moraine. The "ice road" further equipped our village to transport ice blocks from the glacier down to the sea, to ships that carried the ice overseas. The road goes partly between huge landslide blocks from the valley sides. The biggest landslide, that dams up Bondehusvarnet Lake, has let loose from the mountain ridge above Keisarstigen trail. Innermost in the valley lies Bondehusbreen glacier, a westerly arm of Sørfonna. It covers an area of 24 km² and stretches from the body of the glacier, at about 1640 metres above sea level, down to about 400 metres above sea level.

In the last kilometre in front of the glacier there are several moraine ridges. The glacial history here can be reconstructed exactly. From about the year 1650 onward the climate became colder. Most of the glaciers in western Norway began then to advance. This cold period lasted until about 1920. The priest Niels Hertzberg measured the glacier in 1801. On the watercolour it says that the front of the glacier was at about 326 metres above sea level. This compares precisely with the height of the outermost moraine ridge we find in front of the glacier. The picture taken by the photographer Knut Knudsen, who saw the glacier for the first time in 1891, as well as pictures taken by others, makes it possible to map the variations in size of the glacier right up to modern times. A picture from 1870/71 shows that the waterfall from the glacier in Bondehus was big and powerful, and that the birch forest was torn down at the front of the glacier. Later, the glacier melted back for the most part, but made small advances that laid down moraines at around 1930. The retreat ceased at the end of the 1950s. During the next 30 years, the glacier changed little. But, in the beginning of the 1990s, it advanced again, as a result of large amounts of winter precipitation at the end of the 1980s and beginning of the 1990s. Between 1996 and 1997 the glacier advanced a whole 43 metres.

«"Patent-maker" Godskalk Gjerde from Mauranger (right) with tourists on Fonna. Godskalk Gjerde was from the village of Austrepollen, and had a glacier guide certificate from The Norwegian Tourist Association.