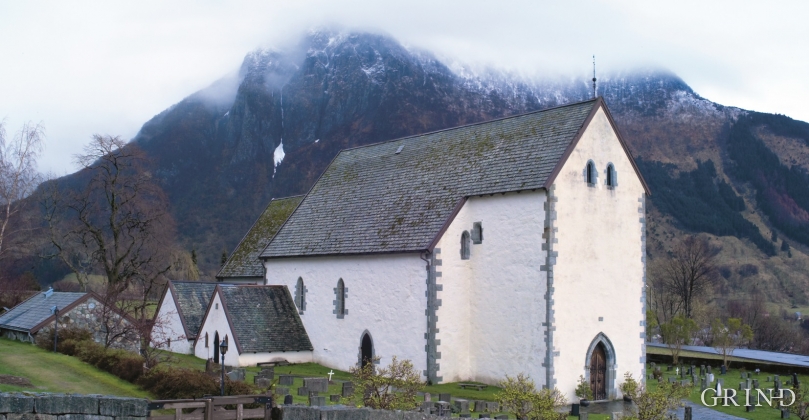 The stately Kvinnherad Church with its characteristic profile set out against the mighty Malmangernuten in the background, gives you a rare feeling of being present in a historic landscape as you come around Nes and face the well-kept houses at the Skåla farm. The church at Skåla is one of four “fjordungskirker” (one of four main district churches) and this farm was the centre of this coastal administration district.

Kvinnherad Church and Skåla Church are names that we come across in the written sources and that seem to be interchangeable. The first time we see a mention of the church is in 1306. The Gothic details in the style on the west portal and the chancel windows show that the church was built around 1300. Originally it may have had a western steeple, but today the roof spans the entire steeple walls. To the north of the choir there is a burial chapel from 1670 and an added sacristy from 1913. The restoration of the church at this time was lead by cathedral architect Olaf Nordhagen. The stained glass painted window in the east of the chancel is made by the Englishman C.O.Skilbeck.

The altarpiece, which is decorated with the Rosenkrantz family’s coat of arms, was painted in 1705 by Hans Sager. The pulpit, with scenes from the Bible, and carved details in the renaissance and baroque style must be from the time around 1640. In the nave hangs a large brass chandelier with engraved coat of arms and the inscription: “Anna Godzen Sc Müller 1766”. In the church spire hang two bells from the Middle Ages.

There is hardly another name in Hordaland that evokes a fresher mood than Rosendal. And the traditional settlement with the barony in flowery dress is well worth a visit. But the name is not old. In a document from 1723 it says: “Rosenthal – earlier called Hatteberg”. And “earlier” must have been before 1678; the year the estate was elevated to barony. The barony was given name after the Danish pattern for the noble families of Rosenvoll and Rosenholm. The syllable Rosen- has thus a German root.

The name Hatteberg is far older. The first syllable Hatte- probably derives back to an older genitive form of the work “hott”, a small, round mountain knob. On the farm there are several such knobs, amongst them on that was called Skolten. Mel is created by the common word “(sand)mel” “sandy ground”, “sandy slope”. At Mel there is supposed to have been a church in medieval times. Seim, which lies a little further south, refers back to Sæheim: “the farm by the sea”. Still more historically interesting is Skåla (pronounced in the same way as the verb “skåle” (propose a toast)), one of the neighbouring farms to the barony. In older times “skåle” was used about a “gildeskål” (meeting house), (cf. Gildeskål in Nordland), and there is reason to believe that Skåla has early been a meeting place for the people in the surrounding district.