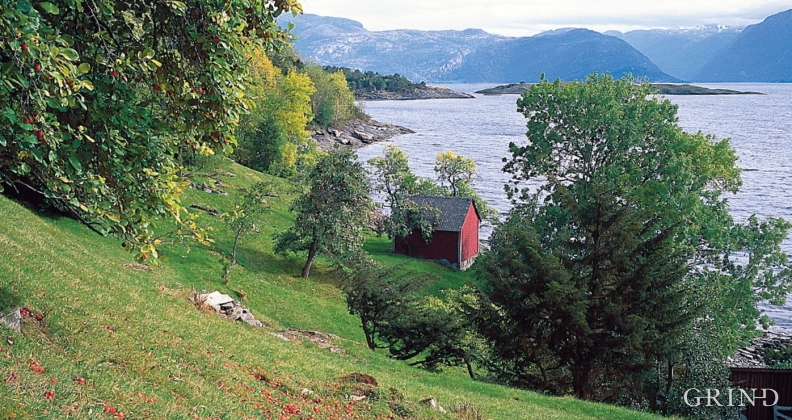 For time immemorial, probably all the way back to the Middle Ages, animals from the Homestead at Gjuvsland have grazed on the sunny slopes on the southeast side of Varaldsøy Island. Only one of the old farms is still in use, but the uniquely rich and varied flowering in the hay Meadows tell of the traditional farming activity over hundreds of years.

For generation after generation this landscape has been grazed and cut in the traditional way, and the valuable broad-leaved trees in the forest have been used in the household in the same manner for hundreds of years, with the cutting of elm and ash branches as supplementary fodder. The hillside, which is about 10 acres, has some very steep parts, and it is difficult to get a foothold when the grass is to be cut and raked in August. Large trees, spread yew, holly, old plum trees, a well preserved hay barn and the shoreline below give the hay harvest an idyllic aura. Most impressive, nonetheless, is the rich variety of flowers, with up to 40 species per square metre. None of the plants can be said to dominate, even though daisies, several golden basket-flowering plants and umbellifers are quite distinctive when they are in flower. Here, we find the majority of plants that grow along the coast. Many of the species are calcium- or warm-loving types. Several of them have gradually become rarer elsewhere in the county in recent decades.

It has taken more than 500 years to develop these meadows. Similar variety of species is not found anywhere else in the west of Norway, and there are probably only a few places left that are still cared for by traditional methods. One of the largest stands of Yew trees is also found in Gjuvslandslia, and a spruce forest that was planted here more than 50 years ago was removed so that the yew would have good growing conditions.

Without farming these meadows would be overgrown and would alter rapidly. Flowers that depend on light, tramping and grazing by animals would disappear. As in other places, there is also a danger here that the cultural landscape will disappear, perhaps forever. These are resources that are not renewable and which constitute valuable experiences for us. Our generation bears a great responsibility in taking care of these valuable resources.

The property is estate fields, and tresspass is prohibited by law, except for along the path through the area. The gates must remain closed because of grazing animals. A part of Gjuvslandslia has been a preserved landscape for 2000 years.

Not only the outer hayfields and grazing fields, but also the forest has been part of the common resources of the Gjuvsland farms. Four farms are part owners of the water-powered sawmill. The rights to the sawmill belong to the property transfer rights of the farms, with a quarter for each: the three first days of the week every second month for one and the last three days of the week for the next. The saw was powered by a large under-shot water wheel that received water from a small dam in the river above. Today it has a circular saw, in former times it had a gate saw. We know that there was a saw at Gjuvsland in 1603. Today there are only a few of these sawmills around. The Gjuvsland saw is the last phase of a long technological development through more than 400 years; a unique historic example.