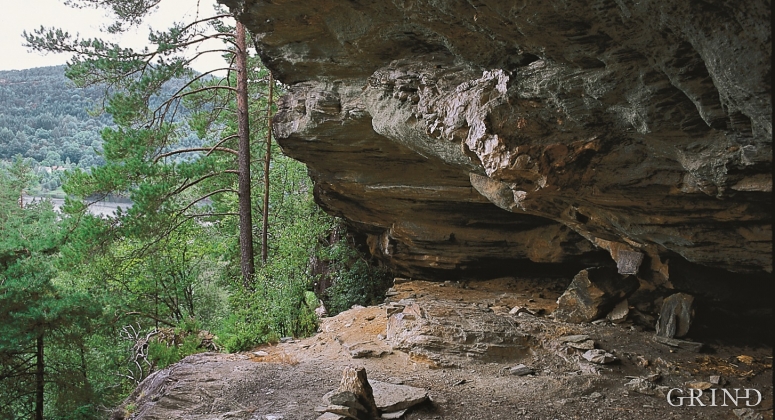 Mine hole above Kvitebergsvatnet Lake, by Atramadalen. There are many traces of the copper mining activity in this area. This hole, which lies high up in the hillside, can only be reached from a narrow path. The opening, which is called Smiehelleren, is about 50 metres deep and has the remains of a forge at the entrance. (Svein Nord)

All in all there are ten known copper mines and two iron mines on the Ølve peninsula. Geologically, the nine mines on Varaldsøy Island also should be figured in. The industry began at Lilledal in 1642 wth the mining of iron ore. From Jernsmauget by Dyråsen, the iron ore was sent to the iron works in eastern Norway.

Just after that, the mining of copper ore took over. Chalcopyrite at Dyråsen mines and in Atramadalen was taken out at the same time as copper was being mined at Røros. The mining operations on the Ølve peninsula continued all the way until 1911.

The basis for the mining was the rock type greenschist. Many of the mines from the over 300 year-old pyrite industry in Norway are associated with greenschist occurrences. The greenschist belt from Ølve to Varaldsøy Island is comprised of remnants of the old sea that existed between Greenland and Norway about 500 million years ago. The basis for the greenschists arose when lava and ash spewed out of the volcanic islands in this prehistoric "Atlantic Ocean" - an ocean that has since closed. During its closure, as Greenland and Norway got nearer to each other, the lava was pressed down to great depths together with layers of mud and clay. When the land areas collided afterward, the Caledonian Mountain chain was formed. The lava was heated and transformed into greenschist, and the mud and clay into mica schist, simultaneously as they were transported in over the bedrock of Hordaland. The layers were folded both under this transport and during later movements along Hardanger Fjord. The pyrite ore is mostly copper-rich sulphur ore with a little iron ore (magnetite and hematite), and is believed to have been formed on the sea floor of the prehistoric ocean. The ore was formed from hot gasses and liquid that was rich in iron and sulphur that flowed up through cracks and volcanic feeder pipes.

The geology and mines in the area around Ølve. (NGU/Haakon Fossen)

Map of the mining area in Atramadalen in Ølve, drawn by Mining Adviser H.F.Blichfeldt in 1768.

Greenschist was created when basaltic lava was depressed to 15-15 kilometres depth, and new, green minerals such as chlorite and epidote were formed.

Planted gold by the Ølve goldmine?

The Ølve goldmine is known as a big hoax from the years 1855-87. Gold was visible in the slag found in innermost Hyttevågen in Ølve in greenish chlorite schists. One should have been able to treat 200 tonnes chlorite schist and get 3 grammes of gold per tonne. Since then, others have looked for gold in the slag at Ølve. But not even with modern methods has it been possible to find a trace of gold. This has made geologists suspicious about the earlier finds of gold. Is it possible that gold was added in order to increase the interest in mining in the Ølve district?

It was soapstone, and not pyrite ore, that first gave the basis for making a living from the bedrock in the area around Ølve. Soapstone lies in a zone over the greenschist. This soft rock type is most often formed when magma with an especially high alkaline content hardens at depth. But, the magmas that form soapstone by Ølve reached the earth's surface as lava. The Ølve stone is not suitable for making pots and pans, but it is easy to break off as slabs. The soft minerals in the stone make it possible for the slabs to be heated without burning or cracking. The slabs are therefore perfect as baking griddles, after they are knocked every which way to get just the right thickness.

There are many prospecting pits in the earth between Ølve and Hatlestrand, all of them on the south side of Kvitebergsvatnet Lake. We can still find remains left from this work, which is believed to date back to Viking times and the Early Middle Ages. Hellebertshelleren, which occasionally is used as a concert hall, is dug out from this soapstone zone.