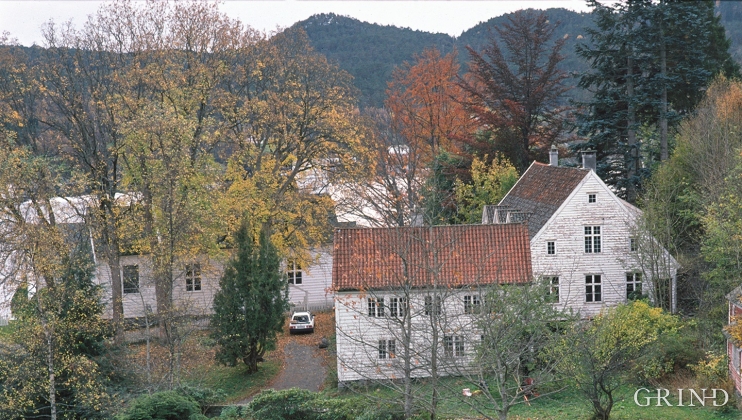 The church from 1722 is to the left in the enclosure, the bishop’s residence from 1730 in the middle and the main building is to the right. (Arne Nilsen).

The beautiful vicarage on the Fjelberg Island lies a few minutes walk up from the fjord, in a compact enclosure with the church south of the main building and the bishop’s residence to the north; a rare harmonic cluster.

The Fjelberg Church and the vicarage were previously the centre for a large region. Fjelberg Parish also comprised Halsnøya, parts of Sveio and Bjoa in Ølen, and it was this parish that was the basis for the newly created municipality in 1837. As long as the fjord was the most important route of communication, Fjelberg was a natural centre.

The stave church at Fjelberg was probably built in the 1200s. The timbered church, which is standing today, was erected in 1722. The vicarage is mentioned for the first time in 1561, but it is unclear whether the priest’s home was in the same place in the Middle Ages as it is today. The main building is supposedly built in 1818 by the priest, A.M.Bruun, who moved “two miserable houses” under one roof. One of them was “Almuestuen” (house for the general public), probably from the 1650s. In the middle of the 19th century the priest and member of the Storting, Laurentius Stub Koren, added on four rooms at the back. The roof was raised and was given a lean-to roof on the west side.

The bishop’s residence is supposed to derive from 1730. This is a building on two floors, related to the type of building with an extended loft, with covered galleries facing the yard and also on the eastern gable. In a row towards the north there are storehouse on stilts, fire house, storeroom and outhouse.

Today Fjelberg vicarage has been restored and functions as refugium and Nordic guest atelier.

Fjelberg is a derivation of “fjolbyrjan” “ the place with many types of fair winds” – the sudden gusts that come from Borgundnuten. Borgund in Borgundøya contains a derivation of “borg”, here in the meaning of “rock, height”..