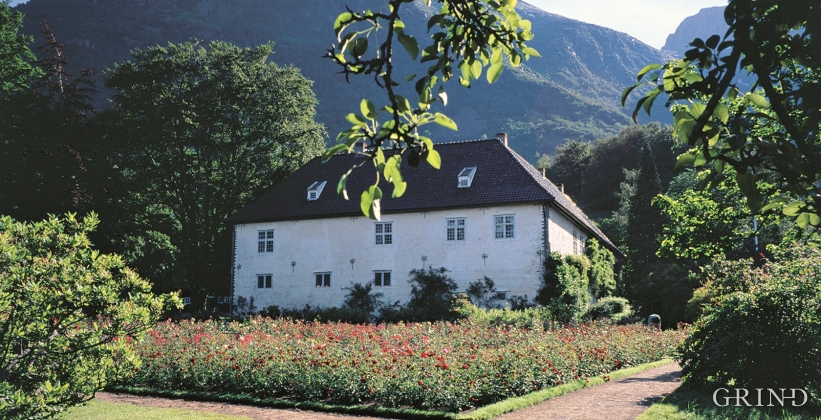 The symmetry of the baroque style is prominent in the Barony, with two wings coming out from the main building, connected with a wall that forms the fourth wall in the castle construction.
The Barony of Rosendal lies in the grounds of the old noble estate of Hatteberg, on the north side of the Hatteberg river, around one kilometre up from the sea. The three noble estates Seim, Mel and Hatteberg constituted the core of the large estate taken over by Ludvig Rosenkrantz in 1662, after he was married to Karen Mowat in 1658.

The beautiful main building was probably built in the years 1660-65, after Ludvig Rosenkrantz had taken over the noble estate of Hatteberg. Karen and Ludvig received Hatteberg as a wedding present. This is where they built their magnificent stone-castle, a luxury dwelling by Norwegian standards. In the middle of the wall there is a grand baroque portal with the coats of arms for both the Mowat and the Rosenkrantz families and the inscription: “Melius Mori In Libertate Quam Vivere In Servitute” (“Better to die in liberty than live in slavery”). The top piece of the coat of arms has the inscription “WB.Ludwich Rosenkrantz Fr. Karren Movath”. A somewhat simpler portal frames the main entrance on the south wing on the opposite side with the inscription: “Wer Gott vertrawet hat wol Gebawet. Anno 1662”. The building is constructed in stone, with corners of steatite and portals of sandstone.

According to history part of the stone has supposedly been taken from the medieval farm chapel of Mel, and Scottish bricklayers are supposed to have executed the work. The sandstone portals on the other hand must have been cut by Danish or North German craftsmen and exported to Rosendal ready cut.

The hipped roof with the little swing at the base of the roof, formerly had the form of a steeper hipped roof without a swing, covered in red tiles as is apparent on the painting by Hans Sager from 1705.

The garden was probably worked up just after the main building was erected. In Sager’s painting we can see a fenced-in renaissance garden with a “garden house” to the west of the castle.

The landscape park was further designed in three stages from around 1850 to the 1870s. Southwest of the old garden the old houses on the farm Hatteberg were pulled down and trees and bushes were planted. Only the smithy is left standing at the entrance to the park.

At the next stage a romantic natural garden was designed, with dams and bridges, south of the main building. In the middle of the garden a small summerhouse was erected on a small rock.

The third stage was the design of the park east of the castle. In the 1870s a nature park was created here with beech trees and pine trees.

The interior is rich and with rare authenticity. Here are rooms with French textile wallpaper from the 1600s, empire furniture made in Bergen and a large collection with the main emphasis on national romanticism.

Master and servants. The families Hoff Rosenkrone and Weis Rosenkrone going on a trip with the ferryboat in 1890.

Træo was a smallholding belonging to the Barony. Painting by Lul Krag.

The kitchen garden at the Rosendal Barony awakens to a new life, after an extensive renovation based on the original garden from the 1600's.

The introduction of autocracy in 1660 was a sting against the old ruling Danish nobility. The king now created a new titular nobility, with counts and barons as the highest echelons.

This nobility was in principle open to “new” families, with roots in the bourgeoisie. For a long time the old nobility kept in the background, but the Rosenkrantz family was an exception.

The economic foundation was Ludvig Rosenkrantz’s marriage to the richest heiress in Norway, Karen Mowat, in 1658. She was the daughter of Axel Mowat at Hovland in Tysnes. Amongst the Mowats’ land properties in Kvinnherad were the old noble estates of Mel, Hatteberg and Seim.

The title of Barony was costly for Rosenkrantz. In order for the estate to obtain the title of Barony in 1678, Ludvig had to give over his entire land property and receive it back as “len” – (a property from which he could rent out land and receive rent). He was then sitting there as baron, with full “hand- og halsrett” (jurisdiction) over the farmers. But if the male line died out, the estate would be returned to the king without compensation. All Ludvig Rosenkrantz’ sons died in war service, all except the youngest, the handicapped Axel – “Baron Clump”. He had no sons, and when he died the property reversed to the crown.

The estate came up for sale and in 1745 it was bought by Edvard Londemann, bishop and lecturer of theology at Bergen katedralskole. He managed to establish the Rosendal as his and his family’s property, and obtained the title of baron on application. He then took the name Londemann de Rosencrone. The old baronial rights were no longer valid, and the inheritance rules were more liberal. The inherited property now followed the normal rules for inheritance and several generations of women.

In 1927 the property was transferred to the University of Oslo under the name “The Weis-Rosenkronske Foundation”. In 1990 the Barony obtained the status as semi-official museum, financed by the state, Hordaland County Municipality and Kvinnherad Municipality.