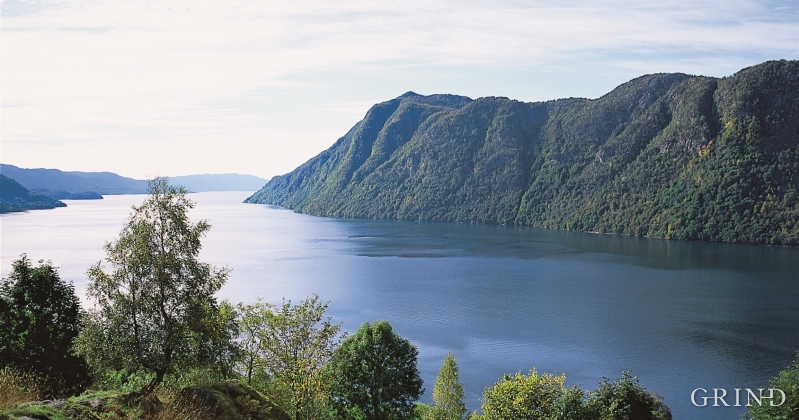 Maters Fjord with Holmedalsberget in the background. (Svein Nord)

SPECIES RICHNESS ON THE STEEP SLOPES

If you want to be on your own for a long day in a magnificent deciduous forest in demanding terrain, then HOLMESDALSBERGET is the right place. This is a big forested area by Matres Fjord in the southwestly part of Kinnherad. Here, we find one of the largest deciduous forests in Hordaland. The forest stretches over several kilometres.

The area was protected as a nature preserve in 1984 in order to take care of the valuable forest on the steep side of the fjord with its natural boundary toward the sea. Here there are no roads or other intervention from modern times. All of the tree species typical of a western Norwegian deciduous forest are found there, such as elm, ash, basswood, hazel, black alder, grey alder and oak. The shapes of many of the trees, especially the ash and elm, show that they have been pollarded (de-branched). It is clear that the forest was previously exploited by farmers. Therefore, it is reasonable to presume that it was more open earlier. Today, quite a lot of younger deciduous trees have grown up between the old stumps.

The plant cover in this deciduous forest contains many herbs, ferns and grass that have special requirements of the climate, rock type and soil. There are well over two hundred species of vascular plants in the forest, and several of them are rare.

Holmedalsberget lies in a district with much precipitation, perhaps as much as between 2000 og 3000 millimetres per year. In that steep terrain the water drains away quickly. But, much remains, also, and gets soaked up by the nutrient-rich brown soil, where the minerals get dissolved such that the plants can take them up through their roots.

The Icterine warbler is connom in the lush deciduous forests in western Norway, also in Holmedalsberget. This species is not as common as earlier - the explanation lies in its overwintering region in Africa, where drought and the use of pesticides poses a serious threat to the birds.