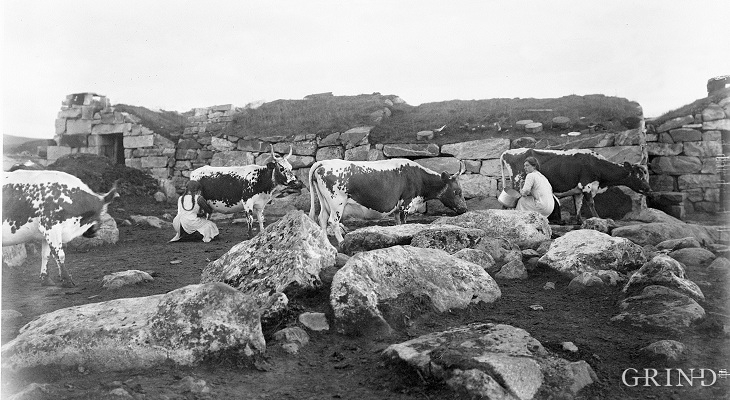 Whoever wanders the mountain plateau will form time to time hit upon old mountain summer farms, with solid old stone sheds, half sunk into the ground; a building tradition that has roots into prehistoric times. When we have been satiated with untouched Nature, it is somewhat comforting to come upon the old mountain chalets - they represent a type of human encroachment that we not only accept, but appreciate. They arouse a feeling of recognition and are a distinct witness to how people in the rural communities have made use of even the most remote resources.

Agastølen in Bjoreidalen is an old mountain summer farm; perhaps the origin stems from an old stone shed that was erected in connection with old cattle drovers. One of the old routes passed here, but only in the 1800s was this settlement expanded with many houses. In the second half of the 1800s, the place was sold to Knut Aga, and acquired the name Agastølen. He is probably the one who built the settlement as it appears today; a building with an annex and fireplace, another one without fireplace, a cheese-shed, a milking-shed, a churning-shed and a cowshed.

In order to use the outlying fields to their maximum potential, the farms in the fjord communities had several mountain farms, at various distances from the main farm. The nearest farms were spring and autumn farms. These were so close to the main farm that the milkmaid could come home with the milk. On the far-away farms, the summer pasture farms in the mountains, the milkmaids lived for 10-12 weeks in the summer. This is where they churned the butter and made cheese. The cheese making required a great amount of fuel, and many summer farms had to move as the forest was depleted. Winter fodder was also collected at the summer pasture. This activity, with cattle grazing, wood cutting and collecting of fodder, has had a great impact on the cultural landscape in the mountain.

The cattle drovers and the traffic across the Hardanger plateau

The great cattle droving across the plateau belongs to later centuries, but the tracks – the old traffic roads across the Plateau – bear witness to a great amount of traffic between Hardanger, Telemark and Numedal; a traffic that goes back to prehistoric times and the Middle Ages.

The mining activity at Kongsberg had a great impact on the rural communities in Hardanger. It was people from Eidfjord who first found their way to the new large market in Kongsberg in the 1600s. The track across the mountain plateau was short and the communication with the east was old. They travelled to Kongsberg with butter, cheese, meat and wool, commodities that people in the mining town were in great need of. Horses for the transport of ore and tallow for candles in the mineshafts were important merchandise.

The trading journeys eastwards followed the old tracks across the mountain plateau. Alongside these we find the many resting places for cattle, such as Hadlaskard and Halne, where the cattle grazed and were fattened before being led to the market places.