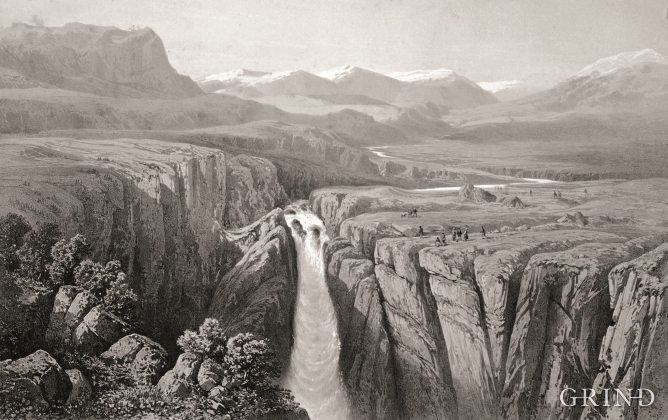 «The Vøring-fos Waterfall», James Randell, 1854. For the romantic travel pioneers this waterfall was a highpoint of their trip to Norway.

The official height of Vøringsfossen is 182 metres. A long time before modern measuring methods were invented, natural historians and other curious people tried to measure the height of the waterfall - using different methods - and with different results.

At the beginning of the 1800s, the astronomy professor Christopher Hansteen (1784–1873) from Christiania (old name for Oslo) measured the waterfall. At the end of the same decade the owner of Hotel Fossli, Ola Garen (1857–1915) challenged his measurements. Both the men described how the fall had been measured. Accounts of Professor Hansteen’s travels over the “Hardanger mountains” and Eidfjord in 1821 were published by the folklore researcher Th.S. Haukenæs in a Norwegian journal entitled: Natur, folkeliv og folketro I Hardanger (1884) (which means, Nature, Population and Folklore in Hardanger, in English):

«I wish to have an idea of the height of the waterfall, and for lack of a better method: one of my travel companions was instructed to take a stone as big as he could lift by hand, and throw it down over the edge of the waterfall. The other of my travel companions was instructed to lie flat on his stomach at the edge of the waterfall and yell “stop!”, at the precise moment when the stone hit the water. I sat a little further away with my chronometer and counted the number of strokes between the throwing of the stone, and when my companion yelled, “stop!”. This experiment was repeated twice, and both times I counted exactly 22 strokes. The Chronometer ticks 5 times in two seconds, so each stroke is 2/5 of a second  = 15,6 “rhinlandske fod” (an old type of measurement conversion comparable to 31.407 cm), and when the amount of fall at different times can be equated to seconds in time, the fall height is 8,8 x 8,8 x 15,6 = 1208 rhinlandske fod, which is our standing point over the valley bottom. But the waterfall’s outflow from the mountainside was somewhat lower than the location for our experiment: I therefore instructed two more throws, and calculated that the first fall time was 10, the second time 11, with an average of 10 ½ strokes of the chronometer, comparable to a fall height of 275 fod. Converting these 275 fod according to the equation above, one finds the height of the waterfall = 933 fod.

In order to capture the truth as near as possible, or at least not to exaggerate the height of the waterfall to be more than it really is, I wish to make the following comments. Though the stone was thrown as near to horizontally as possible, the nature of the throw, partly due to its trajectory, when an object is thrown from a considerable distance, the object makes a slight arch over the horizontal plane, from where it was cast. I will presume, that each throw involved a second to complete this arch, that the stone used ½ second to rise, and when this ½ second is subtracted from the above measure the fall time for the descent to the valley floor = 8.3 seconds and for the fall to the beginning of the waterfall = 3.7 seconds, which gives a height to the waterfall = 861 fod. Finally, the theory assumes that for the above-mentioned calculations to apply, there must be no resistance from the air; air resistance would reduce the speed and prolong the fall time, and this would make the calculated height somewhat too high. However, this would, with such large and heavy objects as the stones thrown here, not comprise enough fod to be significant. I believe with certainty, that the height of the waterfall is between 850 and 900 fod (editorial comment: between 267 and 282 metres), and probably closer to the latter number than the former”. The waterfall can be measured precisely using a barometer, yes because of rock wall’s perpendicular shape, even with a string, but I leave this for my successors to carry out”.

In the Norwegian Tourist Association’s Yearbook from 1893, Ola Garen writes about his measurements:

Those who have seen Vøringsfossen will wonder how I managed to measure its height, and I am willing to give a short explanation.

I let myself down, with the help of a rope, over the edge, some hundred fod from the Fosli side, then climbed further down on the north side right over the waterfall, about 100 fod. I had then a stone, whereupon I had coiled over 200 arm-lengths of strong rope; while I held onto the one end, I threw the coil out over the edge, while its other end, which was fastened to the stone, fell right to the foot of the waterfall.

Thereafter I climbed up the height of the waterfall, drawing the rope behind me, while I had a man with binoculars on the opposite side, who gave a signal when the stone left the ground, which was very easy to see, since there was still snow at the foot of the Vøringsfoss canyon.”