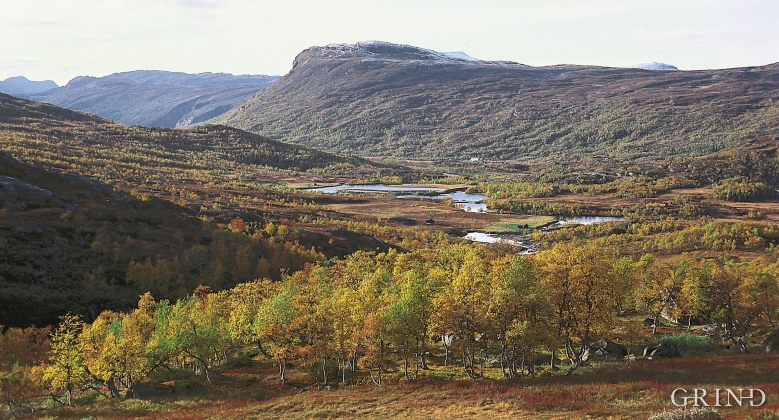 Birch trees creep back up the mountainside in Sysendalen. (Helge Sunde)

FOREST ON THE PLATEAU

If you are lucky you can find 9000-year-old pine stumps on Hardangervidda. Since that time, the tree line has continuously declined. But now, it is on its way back up again.

Not only in the mountains, but also on the coast, we can occasionally find remains of old trees. Pine, oak and juniper are the most common; they are most resistant to rot, and tolerate the wet environment of marshes and tarns well. Up towards the mountains the remains are mostly of pine, while oak, with its entirely different ecological requirements, is found mostly in coastal areas.

The oldest and highest-lying remains of tree stumps are between 9500 and 9000 years old. Pine trees are found in the best growing spots up to 1200–1250 metres above sea level, but not over the whole plateau. Summer temperature is believed to have been roughly 3° higher than today.

A colder and damper climate set in, marshes formed, the tree line crept gradually down the mountain, and the robust grey alder competed well in terrain up to 1100 metres above sea level. Although we know there were also shorter warm periods, the climate became gradually colder until around 5500 years ago. But, from the 200-300 years following this, many pine trunks and stumps have been discovered. The discoveries were mostly from around 1000 meters above sea level several places on Hardangervidda, among them, Veigdalen and on Hallamyrane south of Sysendalen.

Today’s elevation limit for birch in Sysendalen is approximately 950 meters above sea level, and this is somewhat lower for pine trees. This tells us that the tree limit has decreased even more. There are several reasons for this, but a steady decline in air temperature, grazing by mountain farms, and the use of charcoal in the extraction of iron ore are considered the most important factors. There are stumps in Sysendalen from the time of iron ore extraction (from 0 to 1000 A.D.), but also from the last two to three hundred years, from the last pine forest on Hardangervidda (see picture frame).

That birch and pine are now growing higher up the mountain again is mostly related to a decline in grazing due to the abandonment of mountain farms. Some people also believe that the growth of forest into the valleys suggests climatic warming and the Greenhouse Effect. This is difficult to prove as long as the natural tree limit has not yet been reached - grazing of animals right up until the present time holds the tree line artificially low many places.

Operation of a blowing kiln from early Iron Age. The shaft of burned clay is filled with wood that was left to burn into charcoal. Roasted bog iron was filled in from the top. We do not know how they in the end reached the necessary temperature to allow the metal to vitrify and the slag to run into the groove in the ground.

Bog ore: An important natural resource in the iron age

Big industry in Sysendalen in the Iron Age was dependent on two natural resources: charcoal from birch or pine trees that grew in the dense forests of Sysendalen at that time, and ore from the bogs. Iron extraction produced bog ore, the result of a natural process in which several factors are critical: type of bedrock, groundwater, chemical reactions and microbiological activity.

There are usually two different types of bedrock involved: phyllite and granite. The boundary between the two is called the sub-Cambrian “peneplain” and is easily visible in the terrain like a flat shelf, with granite as the foundation. Both types of rock contain iron, but it is the pyrite (FeS2 ) in the phyllite that is the source of bog ore. Water that seeps into the cracks in the phyllite loosen up the chemically divalent iron from the pyrite. The bedrock is relatively hard and dense and therefore the groundwater flows readily along the boundary between the two types of bedrock. The flat rock shelf on this boundary has bad drainage. The high groundwater levels result in much marshland just here.

When the water flows out from the cracks, the easily soluble divalent iron oxidizes in air to ferric iron (Fe2O3). The end product becomes more difficultly soluble rust that clumps together in the marsh to form what we call bog ore. Bacteria that utilize the iron are also a part of this process.

The iron could first be utilized after methods of extraction were invented. This involved using charcoal from charcoal kilns in «blasting pits», of which many have been found in Sysendalen. In the covered kilns the charcoal was incompletely burned to make CO (carbon monoxide). In this way the bog ore, which lay on the surface, was reduced to divalent liquid iron (Fe). This end product then flowed down into the pit.

Forestry in Sysendalen in recent times?

Pollen analysis and stump findings in marshes in Sysendalen tell us about the pine forest on Hardangervidda throughout the Middle Ages and all the way up to modern times, a forest which abruptly disappeared towards the end of the 1700s (see diagram).When the forest disappeared, heather, peat moss and cloudberries took its place. But, both the existence of the forest and its disappearance have been difficult to confirm through written sources, with one exception: information found in a travel journal from a trip over Hardangervidda in 1821,written by the later well known Norwegian professor Mathias Numsen Blytt:

“We wished to see this remarkable thing (editorial comment: Vøringsfossen), and coincidentally discovered a guide, an attractive and spritely 70-year old man, with his backpack on his back and his cane in hand as he came walking over Hølenbroe (…) With our old man we set off alongside the riverbed to the waterfall; and when we wished to see the waterfall from below, if possible, we had to partly climb and partly slide down a pile of logs, which was very steep, and from there walk down some very challenging paths before we arrived down at the river and saw the waterfall at a distance of some hundred fods away.”

The information about the piles of lumber from 1821 gives researchers important historical proof that there has been forestry in Sysendalen in more recent times. This fits well with the marsh findings, both the pollen analysis and the tree stumps. It appears that the forest had been cut down by 1821, but the timber chute was navigable still!

Old pine stumps in the peat in Fetalii by Garden. The stumps were found about a metre down in the peat. The small holes are from samples collected for pollen analysis. (Dagfinn Moe)