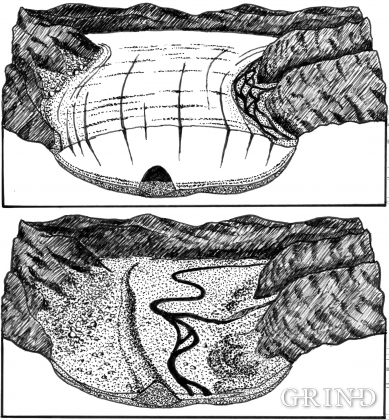 Sketch showing the process of formation of an esker. (Wojtek Nemek)

The last remnants of the inland ice in Hordaland melted on Hardangervidda around 10 000 years ago. Towards the end the ice was thin, and on the flat part of the plateau the ice lay almost still. Geologists call this “dead ice”. Sand and gravel were deposited on the river bottom in tunnels under the ice. One such meltwater river ran from the south end of Halnefjorden over to Tinnhølen and Lake Langavatnet, and further through Sildabudalen valley and over to Veigdalen.

When the glacier melted, long and windy ridges of sand and gravel became visible where the river once had been. It is strange to think that melting water flowed on top of these ridges, or “eskers”, as geologists call them. The ridges are not always continuous. This is because sediments did not get deposited along the whole length of the river. Mountain foxes often made their dens in the gravel ridges. In some places, the dens can still be seen.