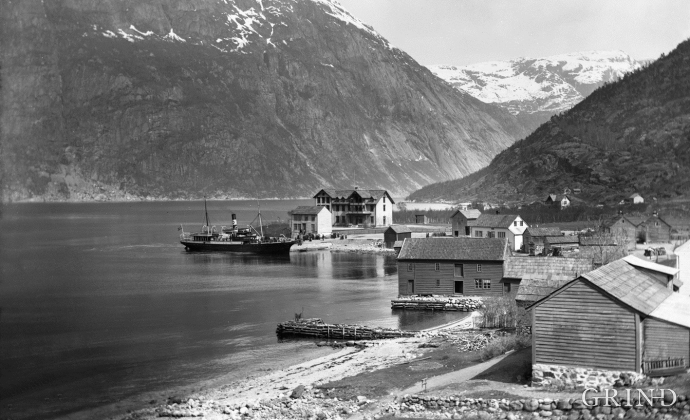 Heggjagarden (in the foreground) and Vøringsfoss Hotel in the beginning of the 1900s. (Photo: Anders P. Wallevik, owner: Hardanger Folkemuseum)

The transport exchange on the farm Vik in Eidfjord was an important part of the communication network in older times. This is where people secured transport by boat out in the fjord, those travelling across the mountain from east and down into Måbødalen. The transport exchange was situated at “Wiige grund”. Today the highway cuts through the farmyard; the main farmhouse from the 1800s lies on the upper side of the road, the large sea-house, with a bakery in former times, lies close to the fjord.

Heggjagarden has its name after sergeant Nils Olsen Heggen. In 1720 he leased a piece of land from an officer friend and established a guesthouse site with “inn-keeping” at the transport exchange. He did not have a licence to run a guesthouse, but the law officer did not want to get involved in proceedings against him: “Experience has shown what support the inn-keepers have, and what circumstances a bailiff gets embroiled in.” It was difficult for the officials to remove illegal inns. Naturally inn-keepers had support amongst the public. Only in the beginning of the 1800s was Heggjagarden granted a licence as privileged guesthouse location and beer bottling plant. At that time it was Svein Winess, the brother of the host at Utne, who owned the place. Magnus Jonsson Myklatun took over the place in 1842, and it was during his time that the trading post had an upswing. The business came to an end in 1889 when the new Vøringsfoss Hotel was built at Ostangen some hundred metres along from the guesthouse site. At that time a new era had begun: the tourism industry.