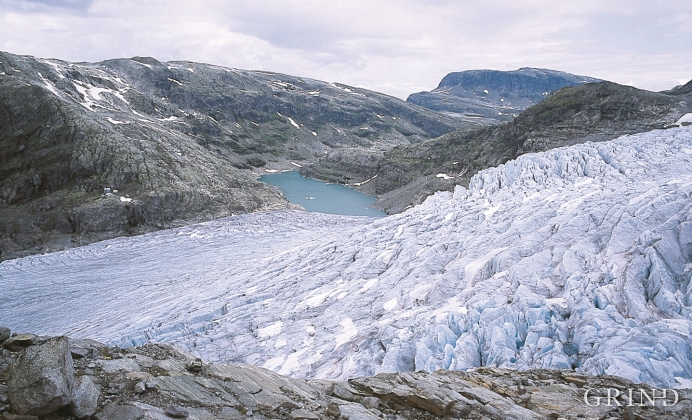 Rembesdalsskåka and the lower part of Demmevatnet, from Tresnuten. Demmevass cabin is visible to the left in the picture. (Svein Nord)

On the 10th of August, 1937, over half of the agricultural land in Simadalen was submerged by the river. The damage to roads and houses was also catastrophic. This was the most destructive flood ever recorded in Hordaland.

The local historian Olav Kolltveit wrote: “An English hiker was on this day en route from Finse to Fossli when he witnessed natural forces at work, as masses of water came gushing over the river banks and turned Rembesdalsfossen into a Niagara Falls. When he got to Fossli there was no one who understood what he was talking about when he likened the Vøringsfossen “to a small stream” compared to the waterfall he had just seen.”

A glacier was responsible for the natural catastrophe. The water from the three Demmevatnet lakes (Lower, Middle and Upper) on the north side of  the Rembesdalsskåka glacial tongue flow naturally under Rembesdalsskåka, out into Lake Rembesdalsvatnet, further through Rembesdalsfossen waterfall and down to Simadalen Valley. During the 1800s and earlier, the water from Demmevatna was occasionally blocked by ice from the once-much-larger glacier. The water in the lower part of Demmevatnet then rose to such a high level that the water finally ran out over the surface of the glacier. After some time the water cut a deep channel down through the ice, so that the water gradually decreased to its normal level again. During this time-interval the water in the Sima was high, but there were no destructive floods - until 1893.

This particular summer the first contribution to the catastrophe came from Rembesdalsskåka. The buoyancy of the water was apparently enough to lift the tongue of the glacier. The water forced itself up under the glacier, and soon opened a large channel. After 24 hours, the lower part of Lake Demmevatnet was totally emptied. This created a big flood in Simadalen valley.
After the flood, it was decided to blast a tunnel under Luranuten Mountain to hold the water level in the lower part Lake Demmevatnet below dangerous levels. The tunnel was finished 1899, and it prevented destructive floods for 38 years.

On the 10th of August 1937, a new flood came nonetheless, and this time with a destructive intensity many times that of the flood of 1893. This time, the lower part of Demmevatnet was emptied in just 3.5 hours! Immediately after this flood a new tunnel was built through the mountain, roughly 50 metres lower down the mountainside from the first tunnel. This tunnel prevented further damage by melting ice until the year 1980. Then, a tunnel was built to drain the outflow west towards the Langevass reservoir, intended to provide enough waterpower for the Sima hydropower plant. The first tunnel built to drain Demmevatnet is now dry and offers a safe route for hikers through the mountainside.

Between 1980 and 2014 the water in the Lower Demmevatnet lake was calm and the water flowed as normal over to the Langvass reservoir. But on August 25th, 2014, Demmevatnet Lake emptied and flowed under the Rembesdalsskåka glacier. Fortunately, there was no damaging flood this time, because the entire outflow was contained behind the dam formed by the glacier.  The same type of drainage occurred in January and August of 2016. The reason for these drainages must be that the Rembesdalsskåka glacier has become thinner and the water more easily finds its way under the ice lobe. The Statkraft energy company has now made a dam that leads the outflow from the Middle and Upper Demmevatna Lakes into a tunnel toward the Langevass reservoir in case the Lower Demmebatnet Lake should drain again.

Sima power station was completed in 1980. Seven hundred metres inside the mountain southwest in the Sima valley a 200 m long, 20 m wide and 40 m high station hall has been gouged out. The power station uses water from two watercourse systems. The annual power production is approximately one and a half times the annual consumption of a town the size of Bergen. Sima power station is open to visitors in the summer.

Simadalen after the flood in 1937. (Normann)