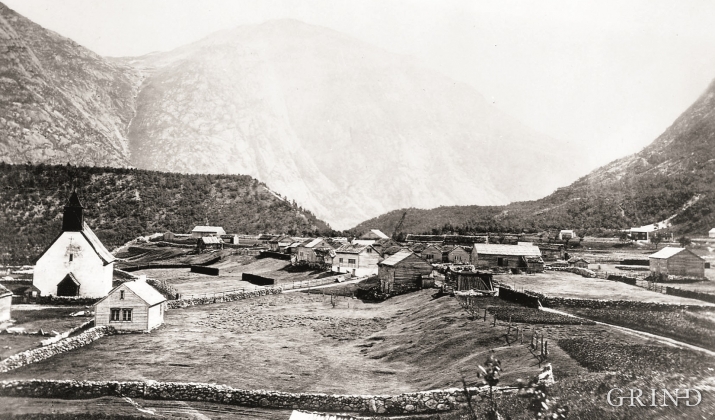 The Eidfjord terrace as seen from Lægreid, presumably in the early 1900s. (Greta Rydtun)

The Eidfjord terrace is a gigantic ridge that reaches up more than one hundred metres from the city centre in Eidfjord. It serves as a powerful natural monument left behind by the ice when it retreated.

The terrace was formed towards the end of the last Ice Age, by gushing rivers of meltwater flowing ahead of the glaciers. A large valley glacier at that time had its front in the northern part of what today is Lake Eidfjordvatnet – close in to the steep edge that slopes down to the water. In front of the glacier the river washed out large quantities of sand, gravel and stone. Further ahead in their path these two rivers met at the fjord and formed a large delta. This explains how an important part of the village was formed, at a time when the sea level was roughly 110 metres higher than today (a in the drawing).

Today, the terrace deposits are divided in two by the river Eio. The highest terrace plateau is especially well developed at Hæreid (“the High Eidet”). On Lægreid (“the Low Eidet”), on the other side of the river, there are more terraces, between 30 and 40 metres high. In 1969 a machine operator found a branch from an juniper in a gravel pit in Lægreid, a seldom find, which was dated to approximately 11 200 years of age.

The terraces are made of layers of sand and gravel, in addition to some stones and blocks. Especially at the top of the terrace on Hæreid, there are a lot of big stone blocks. These blocks were useful when iron-age peoples built burial mounds to honour their ancestors. Along the mountainside at Hæreid there is a depression that forms a channel. This landscape form is testimony to the enormous power of the meltwater when the last glacier melted for good.

The landscape has risen after the weight of the ice disappeared, and the Eio has cut down into the terrace that once stretched across the valley. As the land rose, the river cut deeper and deeper. At the same time new deltas were deposited at progressively lower levels in front of the river mouth. Traces of this are visible in the terraces of Lægreid and further down towards the fjord. The many large blocks of stone in and around Eio show that the Eidfjord terrace used to stretch straight across the valley. The river carried sand and gravel down towards the sea, but was unable to move the larger blocks of stone.

From one of the farms in Hæreid. The large blocks of stone in the foreground were deposited by large melting rivers as the glaciers retreated. During the Iron Age the blocks of stone were used in burial mounds. (Svein Nord)

The creation of Eidfjord Terrace. a) 11 000 years ago. b) Today. . (Inge Aarseth/Kjell Helge Sjøstrøm/Masaoki Adachi)