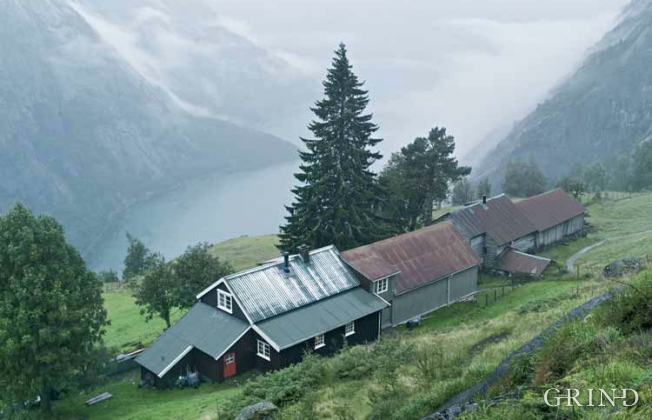 High up above the fjord, at a height of 600m lie the two holdings at Kjeåsen. Today you can drive there by car, through a new tunnel that the power engineers in Sima have drilled. Until 1974 the only road went up the steep hillside, along iron bolted ladders across dizzying rocks – a road for the strong at heart.

There are still people at Kjeåsen, there is still farming being carried on with sheep in the shed and it is an experience getting up there to the simple, but well-kept yard – a close-up of the small subsistence economy. Kjeåsen was situated in an extremely isolated place with – in our view – an incredibly strenuous road to the farm, but here are rich resources right outside the door, and hunting, catching and fishing were the main activities for the people here. The last one to run the place was Helge Åsen. He is gone today, but there is a rich collection of hunting equipment left after him; a chapter in the story of living and surviving.

“The world’s most isolated farm”. This is a newspaper report Bror Ekström's eyes fell upon a summer’s day in 1951, on a beach on the Swedish West Coast, when he and his wife Bojan where about to plan their holiday.  It was a report on Kjeåsen.

“High up there it lies, as a white spot against the grey massif of the vertical,steep mountain wall. Six hundred metres below the emerald green fjord lies glittering. The white spot, that is Kjeåsen, the farm where four people forced so much land and grazing fields from Nature to provide a living for themselves and their animals.

How have they got everything up there: building material for their houses, their animals, all the thousands and thousands of things needed in a home when there is no road, no path to get up there?”

And thus started a modern “mountain tourist” expedition to Eidfjord and Kjeåsen for the Swedish couple, who finally managed to have their names recorded in the famous guest book at Kjeåsen. The trip resulted in the charming book on “The People at Kieåsen”; it is therefore far more Swedes than Norwegians who are familiar with “this eagle’s nest”.