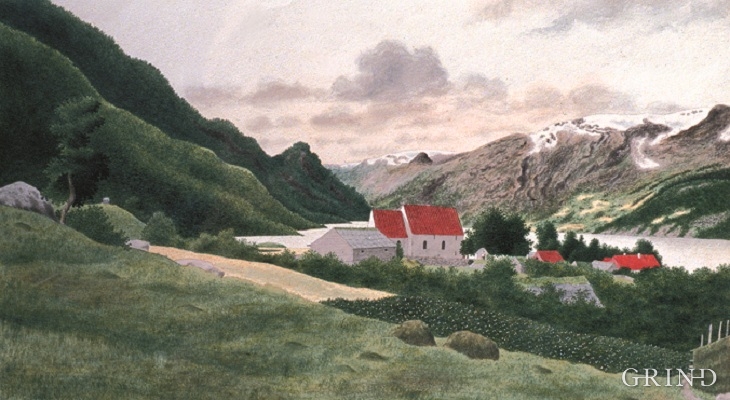 Ullensvang church, situated beside the vicarage, in idyllic surroundings on the headland just inside Lofthus municipality, is mentioned for the first time in written sources in 1309. At that time the present Gothic stone church must have been new. Judging by the style in the western portal and the eastern chancel windows, the church must have been built around 1300 or just before, probably by builders from Bergen influenced by the English Gothic style.

Previously there have been either a stave church or a smaller stone church here. Originally the nave was shorter and without a steeple. During a restoration in 1883-84, supervised by cathedral architect Chr. Christie, the nave was extended by 5.5 metres and a western steeple was added. The old western portal was moved out into the new steeple base. On the church loft are wall tiles that show how the church was beautifully decorated internally around the middle of the 1600s.

Several gravestones, some from the Middle Ages are leaning against the wall at the northern sacristy. Two of them have legible inscriptions. On one of them is written: “her: hvilir: sira: ogmvdr: kåra: son: er: hans: årtid: VII: nato: eptir: festvmat: bodir: f: hanom”. (Here rests Sira Ogmund Kåreson. His year time (of death) is 7 nights after Matthias’ celebration (21 September). Pray for him.).

On the other side is written: “her: hvilrir: herra: sygyrdr: er: var: gula: tings: lo: madr: sonbryniolfs: a: aga: hans: åritd: er: prim: nottom: firir: michalmesso”. (Here rests Mr. Sigurd, who was a Gulatings man (repr. at the West Norway court), son of Brynjulf at Aga. His year time (of death) is 3 nights before Michael’s mass (29 September)).

“The Opedal monastery” and the monks' steps

There is an old legend in Ullensvang that speaks of a monastery in Opedal. From the account of bishop J. Neumann in “Budstikken” in 1826 it appears that up to that time there were remains of a stone building on the farm; a building that clearly seemed to confirm the accounts of a monastery. This building was pulled down at the turn of the previous century.

It was hardly talk of a normal monastery in Opedal, but the accounts probably have some truth in them. Lyse Monastery, which owned Opedal, has had a fine farm here, a bit out of the ordinary; a “grangiè” to use the terminology of the Cistercian monks – i.e. a living farm, managed as a model farm. The place where the monks lived still goes under the name of Munkagard (the monks’ farm): one of the three steadings in Opedal. The chapel is mentioned in 1310 – a stave church – and in a document from 1551, a piece of land is mentioned in Lofthus, “which lies below Øvstetun at Opedal Monastery”. Here there has also probably been a guesthouse.

The monks who lived in Opedal have also most likely had a hand in the careful laying of the steps in the steepest parts of the path that leads up the hillside and further over the mountain plateau. This is one of the medieval paths up on the mountain. Between Opesjo and Veivatn is the mountain pasture and chalet ”Munkabu”, evidence that it is named after the Opedal monks.