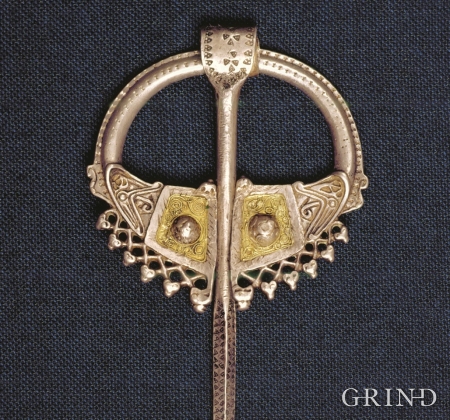 The most precious find from the Viking era has not lain in any grave, but in 1932 it was found buried on a gravel slope. This is where it had probably lain buried for nearly 1000 years. There are two rings, one of gold, the other of silver and a large circular silver buckle with a total weight of 105 grams gold and 600 grams silver. The gold ring has a diameter of 8cm and has been worn on the arm or wrist. The silver ring is a neck-ring, over 20cm in diameter. The ringed buckle is a dress pin, used by both men and women. The ring ends are formed as plates richly ornamented. At the foot of the plates there are two animal heads with open mouths. Even though parts of the ornamentation, especially the banded knots behind the animal heads, show a distinct influence by Irish ornamentation, there is little doubt that the piece of jewellery is made by a Nordic, very likely a Norwegian craftsman. The influence in the style shows that the local craftsmen of the Viking Age were quite familiar with the silver traditions on the other side of the North Sea.